The Voice of Toni Morrison – Human Voices Wake Us

Consider supporting Human Voices Wake us by clicking here: https://anchor.fm/humanvoiceswakeus/support I’ve gone through my favorite interviews with the novelist Toni Morrison and put together my favorite bits. I’ve gathered them into these segments: (:35) On love (parental, romantic, religious) (8:25) On childhood, family history, and being a parent and a writer (43:32) On race, writing in difficult political and social moments, and being more interested in good than evil (1:11:48) On writing in general, and specifically the writing of Beloved The interviews I’ve drawn from are these: Toni Morrison In Depth, on C-SPAN Toni Morrison on Charlie Rose in 1993, 1998, and 2015 Toni Morrison, interviewed by Junot Diaz Toni Morrison interview by Farah Jasmine Griffin at the 92nd Street Y Toni Morrison on NPR’s Fresh Air: in 2015, and a Retrospective Toni Morrison on BBC’s World Book Club Any comments, or suggestions for readings I should make in later episodes, can be emailed to humanvoiceswakeus1@gmail.com. — Support this podcast: https://anchor.fm/humanvoiceswakeus/support 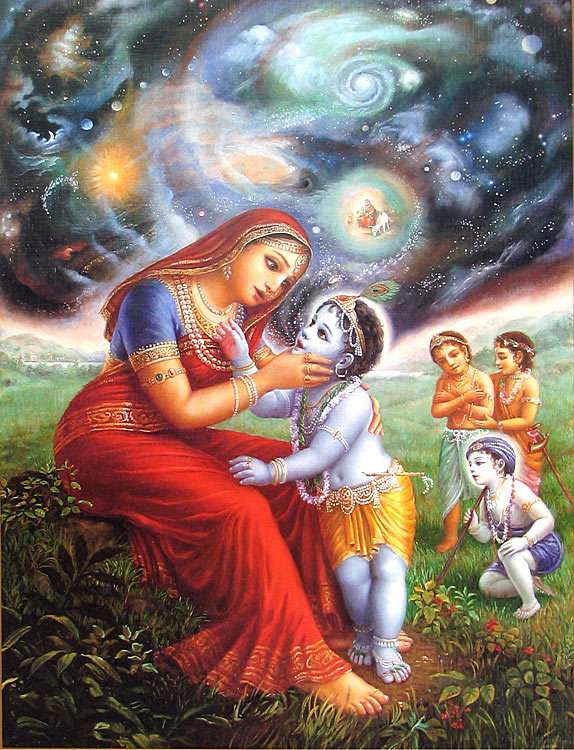 One day when Rāma and the other little sons of the cowherds were playing, they reported to his mother, “Kṛṣṇa has eaten dirt.” Yaśodā took Krishna by the hand and scolded him, for his own good, and she said to him, seeing that his eyes were bewildered with fear, “Naughty boy, why have you secretly eaten dirt?” Kṛṣṇa said, “Mother, I have not eaten. They are all lying. If you think they speak the truth, look at my mouth yourself” “If that is the case, then open your mouth,” she said to the lord Hari [Vishnu], the God of unchallenged sovereignty who had in sport taken the form of a human child, and He opened his mouth.

She then saw in his mouth the whole eternal universe, and heaven, and the regions of the sky, and the orbit of the earth with its mountains, islands, and oceans; she saw the wind, and lightning, and the moon and stars, and the zodiac; and water and fire and air and space itself; she saw the vacillating senses, the mind, the elements, and the three strands of matter. She saw within the body of her son, in his gaping mouth, the whole universe in all its variety, with all the forms of life and time and nature and action and hopes, and her own village, and herself. Then she became afraid and confused, thinking, “Is this a dream, or an illusion wrought by a god? Or is it a delusion of my own perception? Or is it some portent of the natural powers of this little boy, my son? I bow down to the feet of the god, whose nature cannot be imagined or grasped by mind, heart, acts, or speech; he in whom all of this universe is inherent, impossible to fathom. The god is my refuge, he through whose power of delusion there arise in me such false beliefs as “I”, “This is my husband”, “This is my son”, “I am the wife of the village chieftain and all his wealth is mine, including these cow-herds and their wives and their wealth of cattle.”

When the cow-herd’s wife had come to understand the true essence in this way, the lord spread his magic illusion in the form of maternal affection. Instantly the cow-herd’s wife lost her memory of what had occurred and took her son on her lap. She was as she had been before, her heart flooded with even greater love. She considered Hari – whose greatness is extolled by the three Vedas and the Upaniṣads and the philosophies of Sāṅkhya and yoga and all the Sātvata texts – she considered him to be her son.