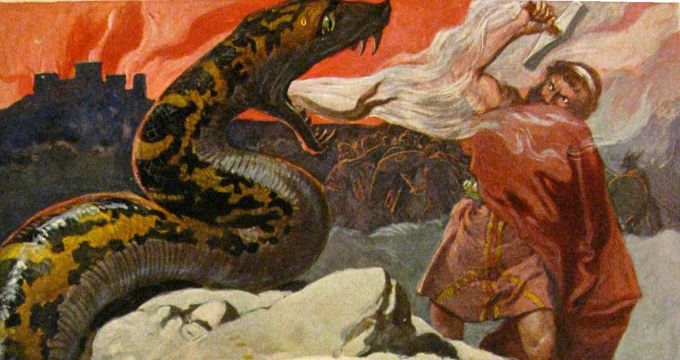 from the Prose Edda:

Then spoke Gangleri: ‘What information is there to be given about Ragnarok? I have not heard tell of this before.’

High said: ‘There are many important things to be told about it. First of all that a winter will come called fimbul-winter [mighty or mysterious winter]. Then snow will drift from all directions. There will then be great frosts and keen winds. The sun will do no good. There will be three of these winters together and no summer between. But before that there will come three other winters during which there will be great battles throughout the world. Then brothers will kill each other out of greed and no one will show mercy to father or son in killing or breaking the taboos of kinship. Thus it says in Voluspa:

Brothers will fight and kill each other, cousins will break the bonds of their relationship. It will be harsh for heroes, much depravity, age of axes, age of swords, shields cloven, age of winds, age of wolves, until the world is ruined.

Then something will happen that will be thought a most significant event, the wolf will swallow the sun, and people will think this a great disaster. Then the other wolf will catch the moon, and he also will cause much mischief. The stars will disappear from the sky. Then there will take place another event, the whole earth and mountains will shake so much that trees will become uprooted from the earth and the mountains will fall, and all fetters and bonds will snap and break. Then Fenriswolf will get free. Then the ocean will surge up on to the lands because the Midgard serpent will fly into a giant rage and make its way ashore. Then it will also happen that Naglfar will be loosed from its moorings, the ship of that name. It is made of dead people’s nails, and it is worth taking care lest anyone die with untrimmed nails, since such a person contributes much material to the ship Naglfar which gods and men wish would take a long time to finish. And in this flood Naglfar will be carried along. There is a giant called Hrym who will captain Naglfar. But Fenriswolf will go with mouth agape and its upper jaw will be against the sky and its lower one against the earth. It would gape wider if there was room. Flames will bum from its eyes and nostrils. The Midgard serpent will spit so much poison that it will bespatter all the sky and sea, and it will be very terrible, and it will be on one side of the wolf. Amid this turmoil the sky will open and from it will ride the sons of Muspell. Surt will ride in front, and both before and behind him there will be burning fire. His sword will be very fine. Light will shine from it more brightly than from the sun. And when they ride over Bifrost it will break, as was said above. Muspell’s lads will advance to the field called Vigrid. Then there will also arrive there Fenriswolf and the Midgard serpent. By then Loki will also have arrived there and Hrym and with him all the frost-giants, but with Loki will be all Hel’s people. But Muspell’s sons will have their own battle array; it will be very bright. The field Vigrid is a hundred leagues in each direction.

‘And when these events take place, Heimdall will stand up and blow mightily on Giallarhorn and awaken all the gods and they will hold a parliament together. Then Odin will ride to Mimir’s well and consult Mimir on his own and his people’s behalf. Then the ash Yggdrasil will shake and nothing will then be unafraid in heaven or on earth. The Æsir will put on their war gear, and so will all the Einheriar, and advance on to the field. Odin will ride in front with golden helmet and fine coat of mail and his spear called Gungnir. He will make for Fenriswolf, and Thor will advance at his side and be unable to aid him because he will have his hands full fighting the Midgard serpent. Freyr will fight Surt and there will be a harsh conflict before Freyr falls. The cause of his death will be that he will be without the good sword that he gave Skirnir. Then will also have got free the dog Garm, which is bound in front of Gnipahellir. This is the most evil creature. He will have a battle with Tyr and they will each be the death of the other. Thor will be victorious over the Midgard serpent and will step away from it nine paces. Then he will fall to the ground dead from the poison which the serpent will spit at him. The wolf will swallow Odin. That will be the cause of his death. And immediately after Vidar will come forward and step with one foot on the lower jaw of the wolf. On this foot he will have a shoe for which the material has been being collected throughout all time: it is the waste pieces that people cut from their shoes at the toe and heel. Therefore anyone that is concerned to give assistance to the Æsir must throw these pieces away. With one hand he will grasp the wolf’s upper jaw and tear apart its mouth and this will cause the wolf’s death. Loki will have a battle with Heimdall and they will cause each other’s death. After that Surt will fling fire over the earth and bum the whole world. Thus it is related in Voluspa:

Loud blows Heimdall, his horn is aloft. Odin speaks with
Mim’s head. The ash Yggdrasil shakes as it stands, the
ancient tree groans, and the giant gets free.

Hrym drives from the east holding his shield before him, Iormungand writhes in a giant rage. The serpent churns the waves, the eagle will screech with joy, darkly pale it tears corpses, Naglfar is loosed.

A bark sails from the east, across the sea will come Muspell’s troops with Loki at the helm. All that monstrous brood are there with the wolf. In company with them is Byleist’s brother.

Surt travels from the south with the stick-destroyer [fire]. Shines from his sword the sun of the gods of the slain. Rock cliffs crash and troll-wives are abroad, heroes tread the road of Hel and heaven splits.

Then Hlin’s second sorrow comes to pass as Odin goes to fight the wolf, and Beli’s bright slayer against Surt. There shall fall Frigg’s delight.

Odin’s son goes to fight the wolf, Vidar on his way against the slaughterous beast. With his hand he lets his blade pierce Hvedrung’s son’s heart. So is his father avenged.

Goes the great son of Hlodyn, dying, to the serpent who shrinks from no shame. All heroes shall leave the world when Midgard’s protector strikes in wrath.

There is a field called Vigrid where shall meet in battle Surt and the sweet gods. A hundred leagues each way it is; this field is marked out for them.’

Then spoke Gangleri: ‘What will happen then after heaven and earth and all the world is burned and all the gods and all Einheriar and all mankind are dead? You said previously that everyone shall live in some world or other for ever and ever.’

Then said Third: ‘There will then be many mansions that are good, and many that are bad. The best place to be in heaven then will be Gimle, and there will be plenty of good drink for those that take pleasure in it in the hall called Brimir. That is also in heaven. That is also a good hall which is situated on Nidafioll, built of red gold. It is called Sindri. In these halls shall dwell good and virtuous people. On Nastrands is a large and unpleasant hall, and its doors face north. It is also woven out of snakes’ bodies like a wattled house, and the snakes’ heads all face inside the house and spit poison so that rivers of poison flow along the hall, and wading those rivers are oathbreakers and murderers, as it says here:

I know a hall that stands far from the sun on Nastrand. North face the doors. Poison drops flow in through the smoke-hole. This hall is woven from snakes’ backs. There shall wade heavy streams men who are perjured and murderers.

But it is worst in Hvergelmir:

There Nidhogg torments the bodies of the dead.’

High said: ‘The earth will shoot up out of the sea and will then be green and fair. Crops will grow unsown. Vidar and Vali will be alive, the sea and Surt’s fire not having harmed them, and they will dwell on Idavoll, where Asgard had been previously. And then Thor’s sons Modi and Magni will arrive, bringing Miollnir. After that Baldr and Hod will arrive from Hel. Then they will all sit down together and talk and discuss their mysteries and speak of the things that had happened in former times, of the Midgard serpent and Fenriswolf. Then they will find in the grass the golden playing pieces that had belonged to the Æsir. Thus it is said:

Vidar and Vali will dwell in the gods’ holy places when Surt’s flame goes dark. Modi and Magni shall have Miollnir when Vingnir fights no more.

And in a place called Hoddmimir’s holt two people will lie hid during Surt’s fire called Life and Leifthrasir, and their food will be the dews of morning. And from these people there will be descended such a great progeny that all the world will be inhabited. As it says here:

Life and Leifthrasir, and they shall lie hid in Hoddmimir’s holt. Dews of morning they shall have as their food, and from them shall grow mankind.

And this also will seem amazing to you, that the sun will have begotten a daughter no less fair than she is, and she shall follow the paths of her mother, as it says here:

A daughter shall Alfrodul bear before Fenrir catches her. She shall ride, when the powers die, the maiden, her mother’s road.

And now if you know any more questions to ask further into the future, I do no know where you will find answers, for I have heard no one relate the history of the world any further on in time. And may the knowledge you have gained do you good.’

Next Gangleri heard great noises in every direction from him, and he looked out to one side. And when he looked around further he found he was standing out on open ground, could see no hall and no castle. Then he went off on his way and came back to his kingdom and told of the events he had seen and heard about. And from his account these stories passed from one person to another.

But the Æsir sat down to discuss and hold a conference and went over all these stories that had been told him, and assigned those same names that were mentioned above to the people and places that were there [in Sweden], so that when long periods of time had passed men should not doubt that they were all the same, those Æsir about whom stories were told above and those who were now given the same names. So someone there was given the name Thor—and this means the ancient Thor of the Æsir, that is Oku-Thor—and to him are attributed the exploits which Thor (Hec-tor) performed in Troy. And it is believed that the Turks told tales about Ulysses and that they gave him the name Loki, for the Turks were especially hostile to him.

– from the “Gylfaginning” in the Prose Edda,
translated by Anthony Faulkes, Edda, 52-58