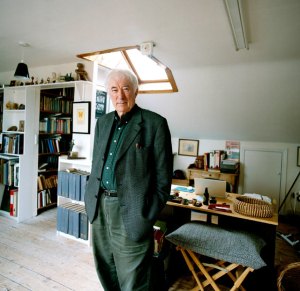 On the week in May 1969 when he wrote “about forty poems”: It was a visitation, an onset, and as such, powerfully confirming. This you felt, was “it.” You had been initiated into the order of the inspired. Even though most of the poems didn’t stand the critical test later on, the experience itself was crucial. From that point on, I felt different in myself as a writer. (147)

Does Heaney see “forcibleness” (from the Greek energeia) as a litmus test of true poetry? It’s certainly what sets the seal of inevitability of much of the best writing. It’s “the force that through the green fuse drives the flower.” The attribute that makes you feel the lines have been decreed, that there has been no fussy picking and choosing of words but instead a surge of utterance. (365-6)

Heaney on his previous comment that “My notion was always that, if the poems were good, they would force their way through”: Eagerness, excitement, a sense of change came over me when I began to write poetry in earnest in 1962. So I’ve always associated the moment of writing with a moment of lift, of joy, of unexpected reward. For better or worse, I arrived at the notion that labor wouldn’t help. From Catholicism, I acquired the notion of grace; and I do believe that, unless there is a certain unforeseen energy to begin with, you can’t proceed. (444)

What I’ve always been interested to find is the right balance between insouciance and application. For years I had a dread of turning out conscientious verse and had a rather negative attitude towards industriousness; it didn’t seem to produce great artistic results—in others, at any rate. Poetry had come into my life suddenly and I’d experienced a change that felt almost magical at the time. So that old-fashioned understanding of poetry as a visitation has been a determining one for me; and, for better or worse, I never set up my writing life on what you might call a professional basis. For most of the years when I was teaching and breadwinning, there was no daily time to set aside for the composition of poems, no routine. I’d even say that deep down there was a superstitious fear that such a procedure might drive the poems away. I had this contrariness, a kind of perverse drive not to trade, even in my own eyes, on the safe conduct that the word “poet” might provide in the academy. Does that many any sense to you? (202)

On the cycles of creative life: What I said in that interview I have repeated often since, but in a somewhat different way. I believe the three phases turn out to be cyclic, that there are renewed surges of endeavor in your life and art, and that, in every case, the movement involves a pattern of getting started, keeping going and getting started again. Some books are a matter of keeping going; some—if you’re lucky—get you started again. Seeing Things was a new start. There, for once, the old saw came true: life began, or began again, at fifty. (324)

On a critic who called Station Island “one of those crisis poems that poets sometimes have to write in order to break an impasse”: Paul Breslin gets it right. I needed to butt my way through a blockage, a pile-up of hampering stuff, everything that had gathered up inside me because of the way I was both in and out of the Northern Ireland situation. (235)

Heaney on self-deprecating comments Heaney has since made to Station Island: That would be going a bit far; it would also be a bit inflationary. And maybe those remarks were ill judged in the first place. Sometimes you test the work you’ve done by hitting it a few cracks, just to see how it stands up to the abuse. At different times, I’ve enjoyed calling the poem “a big barge full of subject matter” and suchlike, but you can be attacked to your barge, especially if you’re a landsman by birth. (239)

On Station Island as punishing the lyric side of himself: I didn’t begin, as you know, by writing at the head of my page, “Now I shall punish lyric.” After the poem was published, I was trying to characterize it from the outside—and doing so, I suppose, in order to give a new reader some orientation. There’s a very earnest note to the thing, but I don’t think I could have done it any other way. The literary critic in me might have fun with what eventually came out, but the poet in me just had to work through the material that was lying piled up in the middle of the road. (240)

Would the Heaney household know that a poem was going on? Not so much in the house, because I would withdraw a bit in order to be on my own. One of the best times for me, for incubating and counting out the beats of a poem, is on long drives. Marie always knows, because she sees my fingers on the steering wheel beating out the thing. Many, many poems were conceived of and started out in that shut-eyed manner—well not literally shut-eyed! As well as car journeys, long aeroplane journeys and seclusions in hotel rooms are good. Escapes like that, displacements from your normal life, are useful for making lists and for allowing images to come up. (446)

One of the things said when I came into company around home in County Derry would always be, “Watch yourself, this fellow might write a poem about you.” It was a joke, but it acknowledged a reality. (249)

I remember Craig Raine saying, “A poem should be as tightly shut as an oyster.” Well, D. H. Lawrence might have said it should be as loose as a big hibiscus. (446)

In Wyatt, Marvell and Yeats, I was very attracted to a plain style. My first impulse when writing had been to make the language as rich as possible and to have a stained-glass effect. But in my forties, I wanted plain clear glass, and soon realized that if the first appeal of a poem isn’t going to be in the texture of its language, then it must have some other means of taking hold, and traditional meter and a syntax that runs over and plays against the lines can do the job. (448)

On revising his poem “An Advancement of Learning”: As a poem, it’s fairly rickety—something I was aware of even then—but there are all kinds of irrational factors at work when you’re dealing with poems. Superstitious loyalties that take precedence over your artistic better judgment. (83)

On Poetry & the Writing Life

Heaney on Yeats’s statement, “Even when the poet seems most himself, he is never the bundle of accent and incoherence that sits down to breakfast; he had been reborn as an idea, something intended, complete”: I keep coming back to the statement because it gets at the truth. It’s another way of accounting for the fact that, if a poem is any good, you can repeat it to yourself as if it were written by somebody else. The completedness frees you from it and it from you. You can read and reread it without feeling self-indulgent: whatever it was in you that started the writing has got beyond you. The unwritten poem is always going to be entangled with your own business, part of your accident and incoherence—which is what drives you to write. But once the poem gets written, it is, in a manner of speaking, none of your business. (197)

In his preface to the Lyrical Ballads—a document still full of wisdom about how the thing works—Wordsworth says, “I believe that my habits of meditation have so formed my feelings, as that my description of such objects as strongly excite those feelings, will be found to carry along with them a purpose.” That would be my feeling: agonizing over those things—how to live properly, I mean—is worthwhile because it forms your “habits of meditation,” your frame of mind, your disposition, your temperament. When it comes to the actual doing, all you really have is your temperament, your disposition, your impulse. But you can affect your temperament by thinking in certain ways. (452)

What has poetry taught you? That there’s such a thing as truth and it can be told—slant; that subjectivity is not to be theorized away and is worth defending; that poetry itself has a virtue, in the first sense of possessing a quality of moral excellence and in the sense also of possessing inherent strength by reason of its sheer made-upness, its integritas, consonantia and claritas. (467)

Would Heaney agree with Wallace Stevens that poetry is “a means of redemption” and that “God is a symbol for something that can as well take other forms, as, for example, the form of high poetry?” I’ve no doubt about the second statement. Poetry is a ratification of the impulse towards transcendence. You can lose your belief in the afterlife, in the particular judgment at the moment of death, in the eternal separation of the good from the evil ones in the Valley of Jehoshaphat, but it’s harder to lose the sense of an ordained structure, beyond all this fuddle. Poetry represents the need for an ultimate court of appeal. (470)