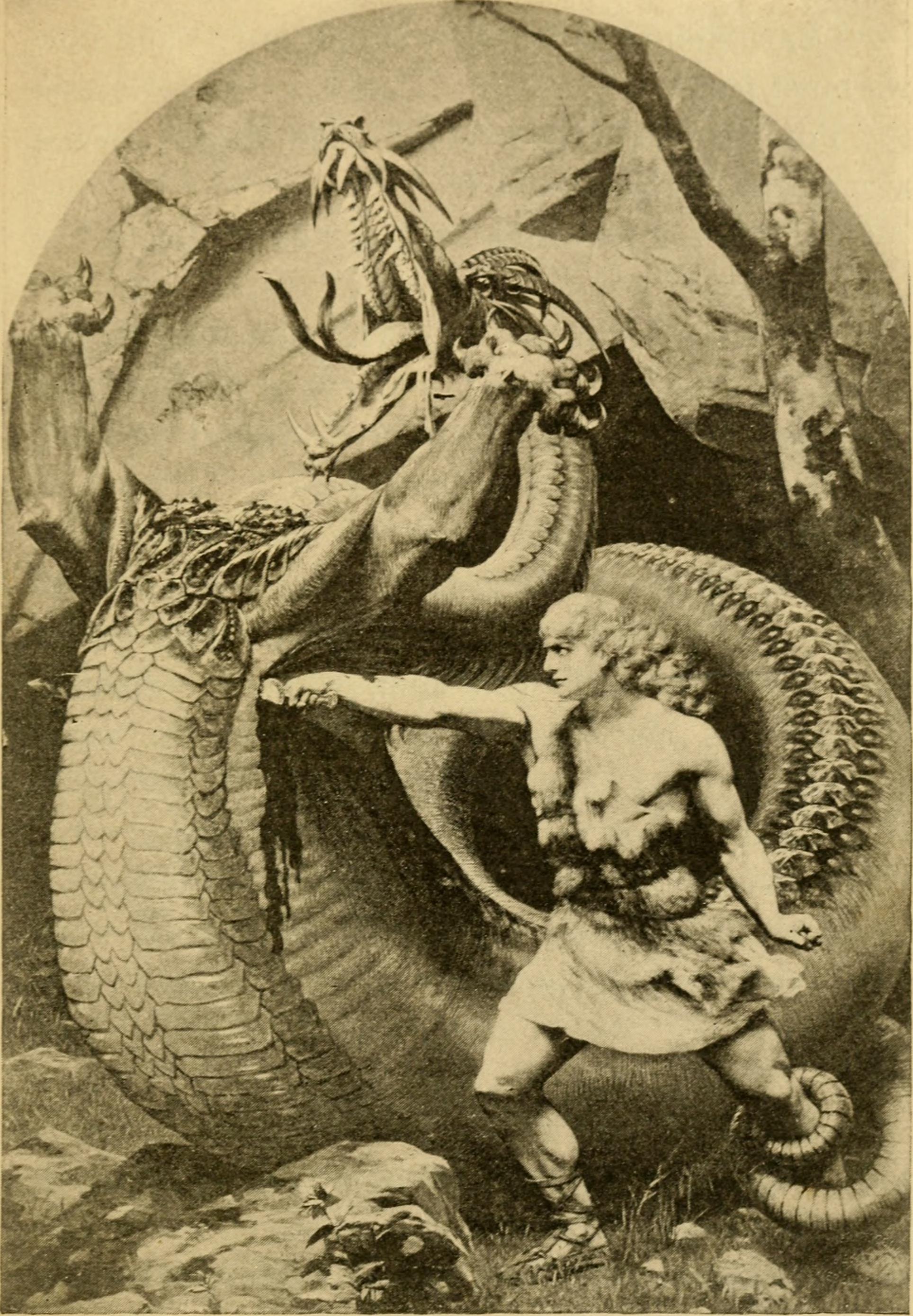 What is the reason for gold being called otter-payment? It is said that when the Aesir went to explore the whole world – Odin and Loki and Haenir – they came to a certain river and went along the river to a certain waterfall, and by the waterfall there was an otter and it had caught a salmon in the waterfall and was eating it with eyes half-closed. Then Loki picked up a stone and threw it at the otter and hit its head. Then Loki was triumphant at his catch, that he had got in one blow otter and salmon.

Then they picked up the salmon and the otter and took them with them, then came to a certain farm and went in. The farmer that lived there was called Hreidmar. He was a person of great power and was skilled in magic. The Aesir asked if they could have a night’s lodging there and said they had plenty of provisions with them and showed the farmer their catch. And when Hreidmar saw the otter, he called his sons Fafnir and Regin and said their brother Otter had been killed and also who had done it.

Now the family went up to the Aesir, and took them prisoner and bound them, and then revealed about the otter, that he was Hreidmar’s son. The Aesir offered a ransom for their lives, as much wealth as Hreidmar wished to decide, and these terms were agreed between them and confirmed with oaths. Then the otter was skinned. Hreidmar took the otter-skin and announced to them that they were to fill the skin with red gold and then to cover it entirely, and these were to be the terms of their settlement.

Then Odin sent Loki into the world of black-elves and he came across a dwarf called Andvari. He was a fish in a lake, and Loki captured him and imposed on him as a ransom all the gold he had in his cave. And when they came into the cave the dwarf brought out all the gold he had, and that was a substantial amount of wealth. Then the dwarf slipped under his arm one small gold ring. But Loki saw and told him to hand over the ring. The dwarf asked him not to take the ring from him, saying he could multiply wealth for himself from the ring if he kept it. Loki said the dwarf was not going to keep one penny and took the ring from him and went out, and the dwarf pronounced that this ring should be the deadly destruction of whoever possessed it. Loki said that he was happy for that to be so, and that it would have power to remain valid, this pronouncement, inasmuch as he would bring it to the ears of those who took possession of the ring.

He went off back to Hreidmar’s and showed Odin the gold. And when Odin saw the ring he found it beautiful and removed it from the treasure, and started paying Hreidmar the gold. The latter then filled the otter-skin as tightly as he could and stood it up when it was full. Then Odin went up to it and began covering the skin with the gold. Then he told Hreidmar to see whether the skin was now fully covered, and Hreidmar looked and examined closely and saw one whisker and said it must be covered, otherwise it was the end of any agreement between them. Then Odin took out the ring and covered the whisker and declared that they were now quit of the otter-payment. And when Odin had taken his spear and Loki his shoes and they had no need to have any more fear, then Loki pronounced that it should remain valid, what Andvari had pronounced, that the ring and the gold should be the death of him who possessed it, and this was subsequently fulfilled. Now it has been told why the gold is called otter-payment or the Aesir’s forced payment or strife-metal.

What more is there to tell about the gold? Hreidmar then took the gold as atonement for his son, Fafnir and Regin demanded something of it for themselves in atonement for their brother. Hreidmar would not let them have a single penny of the gold. The brothers then undertook this terrible course of action that they killed their father for the gold. Then Regin demanded that Fafnir should divide the gold equally between them. Fafnir replied that there was little likelihood of his sharing the gold with his brother when he had killed his father for the gold, and told Regin to be off, otherwise he would meet the same fate as Hreidmar. Fafnir had now got hold of a helmet that had belong to Hreidmar, and put it on his head – it was known as aegis-helm [terror-helmet], and all creatures are afraid of it when they see it – and a sword called Hrotti. Regin had a sword called Refil. Then he fled away, but Fafnir went up on to Gnita-heath and made himself a lair there and turned into the form of a serpent and lay down on the gold.

Regin then went to King Hialprek’s in Thiod and became craftsman to him. Then he took into fosterage Sigurd, son of Sigmund son of Volsung, and son of Hiordis daughter of Eylimi. Sigurd was the most splendid of all war-kings in descent and strength and courage. Regin told him about where Fafnir was lying on the gold and incited him to go and try to get the gold. Then Regin made a sword called Gram, which was so sharp that when Sigurd put it down in running water, it cut in two a tuft of wool that drifted with the current against the sword’s edge. Next Sigurd split Regin’s anvil down to its base with the sword. After that Sigurd and Regin went on to Gnita-heath. Then Sigurd dug a trench in Fafnir’s path and got into it, and when Fafnir crawled down to the water and he passed over the trench, Sigurd thrust the sword through him, and this killed him. Then Regin came up and told him he had killed his brother, and said he was willing to accept from him in atonement that he should take Fafnir’s heart and roast it on a fire, and Regin lay down and drank Fafnir’s blood and lay down to sleep. But when Sigurd was roasting the heart and he thought it must be done, he tried with his finger how tough it was. And when the juice ran out of the heart on to his finger, he was scalded and put his finger in his mouth. And when the heart’s blood touched his tongue, he found he knew a bird’s speech, and understood what the tits singing in the tree were saying. One of them said:

“There sits Sigurd, spattered with blood, Fafnir’s heart at the fire he roasts, wise I would consider the ring-spoiler [generous man] if he ate the shining life-steak [heart].”

“There lies Regin,” said another, “planning with himself, intending to trick the boy who trusts him. In his wrath he composes crooked speeches. The maker of mischiefs intends to avenge his brother.”

Then Sigurd went up to Regin and killed him, and then to his horse, whose name was Grani, and rode it until he came to Fafnir’s lair. Then he picked up the gold and tied it in packs and put them up on Grani’s back, and climbed on himself and rode on his way. Now the story has been told that is the origin of gold being called lair or abode of Fafnir or metal of Gnita-heath or burden of Grani.

– from the “Skáldskaparmál” in the Prose Edda,
translated by Anthony Faulkes, Edda, 99-102