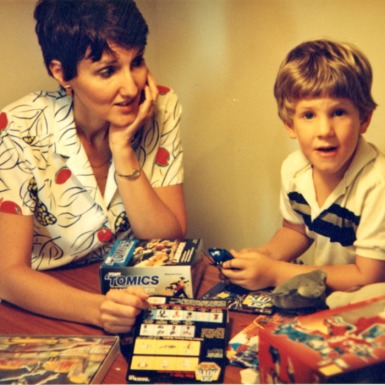 The Mother at the Salon

She was at the salon hours after
another mother sat in the same seat:

a victim’s mother, she a perpetrator’s.
Yet it wasn’t warmer or more desolate

to sit where her seeming opposite had sat,
both readying for a funeral or

both seeking what only old habit could give.
Both were covered in the same plastic cape

and felt the same hairdresser’s hands on their necks
and neither was redeemed or condemned by circumstance.

Hair fell – or didn’t – the way it always had
and the old chair lifted or spun their same weight,

mourning or guilt weighing or releasing
them not an inch from what was all inside.

The Mother at Home

The day of the shooting she packed quickly
to get to a friend’s house before the press did;
there were two duffel bags she couldn’t find

and they would show up later in footage
from the cafeteria, weighed down with bombs.
For months she left his hair in the bathroom brush

and the pile of his stubble in the razor
and would not wash her son’s scent from his clothes.
As if he were a newborn, his body

alone at the coroner was a horror
since he’d always gone to the doctor with her.
The cold body of her boy haunted her

and this only ceased when he was cremated,
the only way she could make him warm again.
She went to where he killed himself – to where

he and his friend had killed so many –
she went to that library and she knelt
to the carpet that had caught him when he fell,

her monstrous son that she still so loved,
the one whose conscience had withered away,
the one who claimed The most miserable

existence in the history of time
for himself, in her house, daily with her,
the one he should have taken too,

the one who gave her the same diary
she now laments into, or remembers
the fourth grade boy at his origami,

she beside him with some breakfast tea watching,
the same awe as at four months or four years,
this business of an independent life

she was meant to guide but also let go of.
That morning as he folded shapes and creased
the paper into some animal

his hands themselves were like hummingbirds,
quick and confident in their creation –
the same hands that would kill or let one go