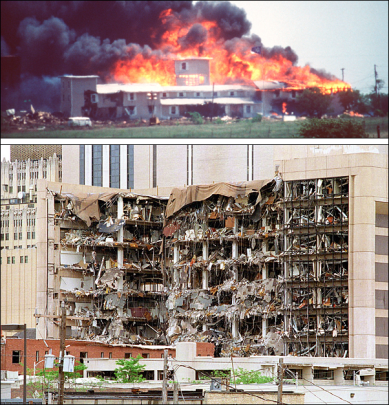 The Two of Them

and a scalloped building seen from overhead,
some cross-section into safe offices
safe no more and blown out to the street below.
They may have seen their school on TV that day,

the weird mirror of someone looking in,
cameras and eyes now there because of them, fame.
They knew, between the boredom and pleading,
between someone begging and the dullness

even of killing, that someday for sure
tourists would come just to point at the place,
that even in sympathy people were sick –
not as bad as them, but pointing the way.

But their desire for fame was still shit,
the “lasting impression” their own cliché,
just as dumb as the movies or dumber –
so smart in your own mind, so superman,

was demolished and left only as air
so the atrium below would rise up,
like the empty ground of Waco or the
voided Oklahoma offices,

the same hollowness they saw as boys,
boys or teenagers in front of the TV
hearts maybe not yet persuaded by power
and still moved by the world’s mourning why.