Just back from London, where the hugeness of space and history were hard to ignore.

But the experience was always deepest in the smallest space, where something sacred, or just something simply old, could be apprehended intimately, in silence.

So that it was not Westminster Abbey, despite its beauty as a space and the unnerving realization that one is walking by the actual tombs of early kings and queens, including Elizabeth I. It was not this, but Westminster’s cloister:

And it was Westminster’s Chapter House, with its original 13th-century tile, 14th-century paintings on the wall, and nearby the oldest door in England, supposedly used by Edward the Confessor, c. 1050:

And it was, most of all, Westminster’s Pyx Chamber, also dating to shortly after 1066. It is hard to say why this room struck me, but I could have stayed there for days: 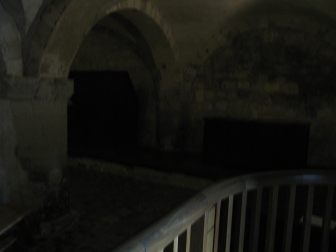 It was also not the Tower of London, the only time where the idea of royalty truly stank of excess and arrogance and blood, especially at the exhibit of the crown jewels. It was not here, but nearby, at the church of All Hallows by the Tower, a place gutted during the Blitz, the damage revealing a c. 775 Saxon Arch from the earliest version of the church, as well as c. 200 Roman pavement in the crypt below, and of course, crypt chapels for silence: 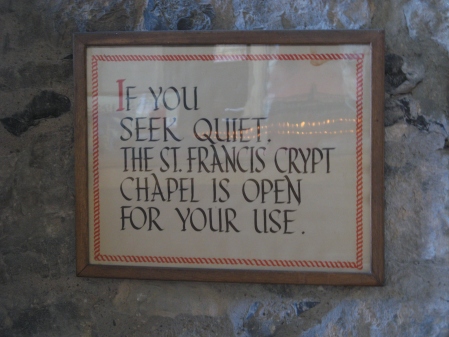 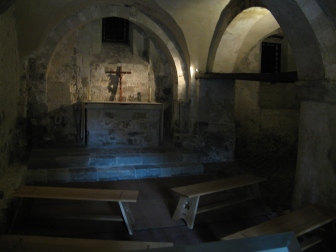 And it wasn’t even London, really, so much as it was a side-trip to Salisbury, an hour or so west by train. We constantly compared London’s transport system to New York’s (having endured the latter for four years) and always found London’s easier to use, and London in general more friendly, with maps everywhere on the street. There was also much more walking space in London than New York–walking as in ambling and relaxing, not NYC sidewalks that are merely pathways to rush from one place to the next. The sidewalks were always wider than you would expect, there was always a park or a garden nearby, there was always a sense of nature being near. And in Salisbury, nature was always near, such as the River Avon, and the city’s wide streets: 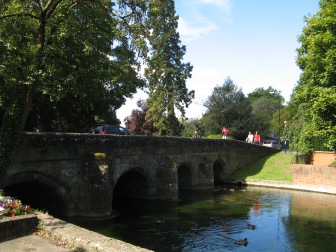 And while I would take Salisbury Cathedral over Westminster Abbey any day, I would take its Chantry Chapel, c. 1520, over the entire Cathedral–in fact, over most of what I saw and have seen of religious or political architecture. Just a small room a man had built in the middle of the cathedral. On this trip there were a dozen of these small places that, had I stopped to kneel or just to think too long, I’m sure I would have broken down. The Chantry Chapel was the most powerful of them: 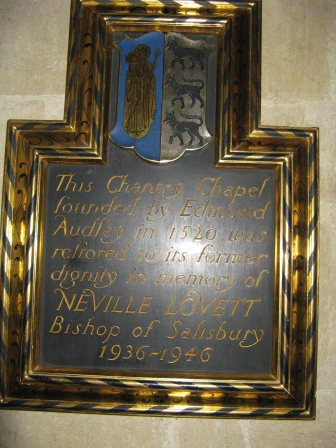 Or, actually on par with it, was Stonehenge. Yet even here, it was still intimacy over the hugeness of space. It strikes me that a large city, large buildings, a large cathedral, even a large city garden, is only trying to convey what nature does on its own, and this is seen on the Salisbury Plain where Stonehenge sits. You think the stones are huge, and get distracted by the logistics of how they did it and start arguing about it, rather than being pleased that people did it at all, and for sacred purposes, and that it was placed consciously in a huge landscape made intimate by its placement there. I mean, that the landscape was intimate already, and the people knew it, and placed something there not to surpass nature, but to be with it. It is impossible to take a bad photo of something that is already filled with rhythm, and which cooperates with everything around it: 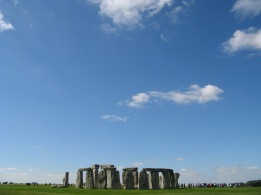 And it didn’t hurt to have contemporaneous burial mounds nearby, either:

There were also London’s Roman remains. Yet even the statue, apparently of the emperor Trajan, and the remains of the Roman wall (with medieval additions) behind him, seemed intimate and begging silence, surrounded as they were by the London tube, crowds of tourists, and the nearby Tower of London. Trajan and the wall look pretty lonely and sad, Ozymandias-like, a hand raised and a wall raised for a Rome that isn’t here anymore–and which, by world standards, wasn’t here for very long anyway:

Another image of Roman London struck me the same way–this one near Westminster Abbey, across the street from Big Ben and the Houses of Parliament, and perpetually looking down on the Thames, on traffic, and crowds of tourists who probably don’t notice her. I mean a statue to Boudica, the woman who led an unsuccessful revolt against Rome, and burned Roman London down. It is odd to see Britain, a Christian nation and seat of a once great empire, embrace this pagan woman (this “barbarian” woman, they would probably say of anybody else) who revolted against the empire that subjected her:

We also came to London to see about writers. The only one we actually met was Donald Rumbelow, a former London policeman, crime historian, and author of a few books on Jack the Ripper. We took the Jack the Ripper walking tour he gives,  and followed him and the tiny plastic stool he stood upon at each stop. His talk lasted about two hours, and there was nothing theatrical about it, not one moment that was merely supposed to be shocking, or gory. It was better than any other “entertainment” we could have sought on a Friday night in London, and it just goes to show that the human voice alone, eloquently and succinctly tuned, can be as riveting as anything–and it reminded me of why I bother writing at all. Even more to Rumbelow’s credit, he ended his tour saying he didn’t know who the Ripper was, and even said that one of his older theories had been disproved. He could have left a bunch of tourists who didn’t know any better with a theatrical certainty, but instead left it as it probably is, an unknown. Here he is with us at Spitalfields Market, near where one of the victims, Annie Chapman, was last seen:

There was also a T. S. Eliot pilgrimages of sorts. We found his early address at 18 Crawford Mansions, where he lived from 1916 to 1920, and at nearby 9 Clarence Gate Gardens, where he lived shortly after. The streets around these addresses are beautiful, especially the chimney tops: 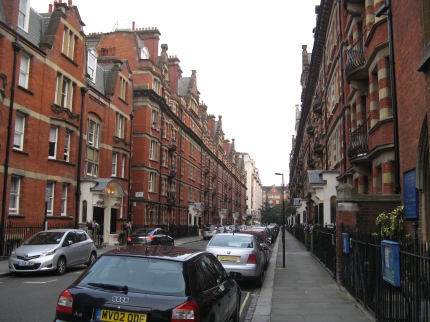 We also found, on our last full day there, St. Stephens Church, where Eliot was baptized into the Anglican faith in 1927, and where he worshiped for the rest of his life. It was something to think of him, after and amid so much inner turmoil, finding at least some sustenance and peace there. For twenty-five years he was also a church warden, and it was equally nice to think of him, simply tidying up the place. (A small orchestra was using most of the church to practice when we walked in, so most of the photos were taken outside, except the dark one of me standing by a memorial plaque set up to him) 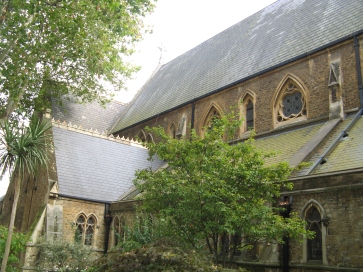 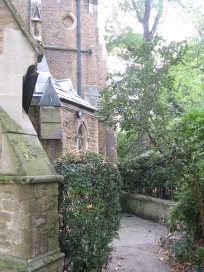 Finally, there were two graves in Highgate Cemetery East. The first for Peter Ucko, an archeologist I had read from his work in Egyptology, with an Egyptian prayer to Nut on the front of his stone, and a predynastic Egyptian statue carved on its back:

And then the grave of Douglas Adams. A simple stone and some pens (to which we added one of our own) is enough: