Week of the Bomb #4 – Human Voices Wake Us

Finally, voices from Hiroshima and Nagasaki.

When The New Yorker dedicated its entire August 31, 1946 issue to John Hersey’s Hiroshima, the editors wrote that they did so “in the conviction that few of us have yet comprehended the all but incredible destructive power of this weapon, and that everyone might well take time to consider the terrible implications of its use.” In light of our peculiarly modern strain of cultural divisiveness, where someone is forced to either condemn or acclaim the bombings without reservation, our political leanings in 2016 are granted a status immensely more important than the bombings themselves. As a result, we devote less and less time considering just what happened. So here is only an introduction to that, and how at least one scientist spent the rest of his life dealing with it.

Manhattan Project study: Because the head in [the] flash comes in such a short time, there is no time for any cooling to take place and the temperature of a person’s skin can be raised [to 120° F] … in the first millisecond at a distance of [2.3 miles].[1]

Japanese study: The temperature at the site of the explosion … reached [5,400° F] … and primary atomic bomb thermal injury … was found in those exposed within [2 miles] of the hypocenter….[2] severe thermal burns of over grade 5 occurred within [0.6 to 1 mile] of the hypocenter… and those grades of 1 to 4 [occurred as far as 2 to 2.5 miles] from the hypocenter…. Extreme intense thermal energy leads not only to carbonization but also to evaporation of the viscera.[3]

Richard Rhodes: People exposed within half a mile of the Little Boy fireball, that is, were seared to bundles of smoking black char in a fraction of a second as their internal organs boiled away. “Doctor,” a patient commented to Michihiko Hachiya a few days later, “a human being who has been roasted becomes quite small, doesn’t he?” The small black bundles now stuck to the streets and bridges and sidewalks of Hiroshima numbered in the thousands.[4]

A junior-college girl in Hiroshima: Screaming children who have lost sight of their mothers; voices of mothers searching for their little ones; people who can no longer bear the heat, cooling their bodies in cisterns; every one among the fleeing people dyed red with blood.[5]

Nineteen year-old woman in Hiroshima:  I saw for the first time a pile of burned bodies in a water tank by the entrance to the broadcasting station. Then I was suddenly frightened by a terrible sight on the street 40 to 50 meters from Shukkein Garden. There was a charred body of a woman standing frozen in a running posture with on leg lifted and her baby tightly clutched in her arms. Who on earth could she be?[6]

Junior-college woman in Hiroshima:At the base of the bridge, inside a big cistern that had been dug out there, was a mother weeping and holding above her head a naked baby that was burned bright red all over its body, and another mother was crying and sobbing as she gave her burned breast to her baby.”[7]

Husband and wife in Hiroshima: While taking my severely-wounded wife out to the riverbank by the side of the hill of Nakahiro-machi, I was horrified, indeed, at the sight of a stark naked man standing in the rain with his eyeball in his palm. He looked to be in great pain but there was nothing I could do for him.[8]

Another witness in Hiroshima: There were so many burned [at a first-aid station] that the odor was like drying squid. They looked like boiled octopuses…. I saw a man whose eye had been torn out by an injury, and there he stood with his eye resting in the palm of his hand. What made my blood run cold was that it looked like the eye was staring at me.[9]

Third grade boy in Hiroshima: Men whose whole bodies were covered with blood, and women whose skin hung from them like a kimono, plunged shrieking into the river. All these become corpses and their bodies are carried by the current toward the sea.[10] …I got terribly thirsty so I went to the river to drink. From upstream a great many black and burned corpses came floating down the river. I pushed them away and drank the water. At the margin of the river there were corpses lying all over the place.[11]

Fifth grade girl in Hiroshima:  I do not know how many times I called begging that they would cut off my burned arms and legs.[12]

Young woman in Hiroshima: We gathered the dead bodies and made big mountains of the dead and put oil on them and burned them. And people who were unconscious woke up in the piles of the dead when they found themselves burning and came running out.[14]

Fourth grader in Hiroshima: At the site of the Japanese Red Cross Hospital, the smell of the bodies being cremated is overpowering. Too much sorrow makes me like a stranger to myself, and yet despite my grief I cannot cry.[15]

The dream of Michihiko Hachiya, a Japanese doctor wounded by the bomb who tended to the other survivors:  It seems I was in Tokyo after the great earthquake and around me were decomposing bodies heaped in piles, all of whom were looking right at me. I saw an eye sitting on the palm of a girl’s hand. Suddenly it turned and leaped into the sky and then it came flying back towards me, so that, looking up, I could see a great bare eyeball, bigger than life, hovering over my head, staring point blank at me. I was powerless to move. I awakened short of breath and with my heart pounding.[16]

From Hiroshima & Nagasaki: the burned shadows, the ruins, the dead, the living: 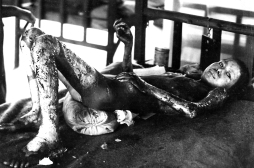 Robert Oppenheimer: We took this tree with a lot of ripe fruit on it, and shook it hard and out came radar and atomic bombs. [The] whole [wartime] spirit was one of frantic and rather ruthless exploitation of the known.[17]

Robert Oppenheimer to American Philosophical society: We have made a thing, a most terrible weapon that has altered abruptly and profoundly the nature of the world … a thing that by all the standards of the world we grew up in is an evil. And by so doing … we have raised again the question of whether science is good for man.[18]

Robert Oppenheimer: The peoples of the world must unite, or they will perish. This war, that has ravaged so much of the earth, has written these words. The atomic bomb has spelled them out for all men to understand. Other men have spoken them, in other times, of other wars, of other weapons. They have not prevailed. There are some, misled by a false sense of human history, who hold that they will not prevail today. It is not for us to believe that. By our works we are committed, committed to a world united, before the common peril, in law, and in humanity.[19]

Robert Oppenheimer: In some sort of crude sense which no vulgarity, no humor, no overstatement can quite extinguish, the physicists have known sin; and this is a knowledge which they cannot lose.[20]

I. I. Rabi on Oppenheimer’s “sin” remark: That sort of crap, we never talked about it that way. He felt sin, well, he didn’t know who he was…. [Oppenheimer] was full of too many humanities … [and had] a tendency to make things sound mystical.[21]

Henry Wallace: The guilty consciousness of the atomic bomb scientists is one of the most astounding things I have ever seen.[22]

Robert Oppenheimer, upset over a fictional play about him: What I have never done [but which the play shows] is to express regret for doing what I did and could at Los Alamos; in fact, on varied and recurrent occasions, I have reaffirmed my sense that, with all the black and white, that was something I did not regret…. [He was mostly upset with the] long and totally improvised final speech I am supposed to have made, which indeed affirms such regret. My own feelings about responsibility and guilt have always had to do with the present, and so far in this life that has been more than enough to occupy me.[23]

Robert Oppenheimer: Taken as a story of human achievement, and human blindness, the discoveries in the sciences are among the great epics.[24]

James B. Conant: I did not see in 1917, and do not see in 1968, why tearing a man’s guts out by a high-explosive shell is to be preferred to maiming him by attacking his lungs or skin. All war is immoral. Logically, the 100 percent pacifist has the only impregnable position. Once that is abandoned, as it is when a nation becomes a belligerent, one can talk sensibly only in terms of violation of agreements about the way war is conducted, or the consequences of a certain tactic or weapon.[25]

Neils Bohr: Only by extending this powerful weapon to other countries could we guarantee that it would not be used in the future.[26]

Closing moments of Jon Else’s The Day After Trinity, with montage of more and more powerful atomic explosions, and an elderly Oppenheimer’s sadness and seeming impotence in the face of nuclear proliferation:

[24] Richard Rhodes, The Making of the Atomic Bomb, epigraph