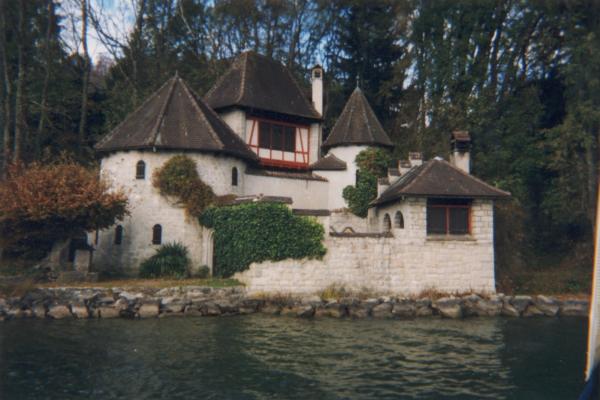 Jung traveled with Freud and others to America in late September, 1909, and on the boat returning to Europe, he had a dream. This small paragraph is as resonant as any I know:

“This was the dream. I was in a house I did not know, which had two stories. It was ‘my house.’ I found myself in the upper story, where there was a kind of salon furnished with fine old pieces in rococo style. On the walls hung a number of precious old paintings. I wondered that this should be my house, and thought, ‘Not bad.’ But then it occurred to me that I did not know what the lower floor looked like. Descending the stairs, I reached the ground floor. There everything was much older, and I realized that this part of the house must date from about the fifteenth or sixteenth century. The furnishings were medieval; the floors were of red brick. Everywhere it was rather dark. I went from one room to another, thinking, ‘Now I really must explore the whole house.’ I came upon a heavy door, and opened it. Beyond it, I discovered a stone stairway that led down into the cellar. Descending again, I found myself in a beautifully vaulted room which looked exceedingly ancient. Examining the walls, I discovered layers of brick among the ordinary stone blocks, and chips of brick in the mortar. As soon as I saw this I knew that the walls dated from Roman times. My interest by now was intense. I looked more closely at the floor. It was of stone slabs, and in one of these I discovered a ring. When I pulled it, the stone slab lifted, and again I saw a stairway of narrow stone steps leading down into the depths. These, too, I descended, and entered a low cave cut into the rock. Thick dust lay on the floor, and in the dust were scattered bones and broken pottery, like remains of a primitive culture. I discovered two human skulls, obviously very old and half disintegrated. Then I awoke.” (Memories, Dreams, Reflections, 158-9)

In his biography of Jung, Ronald Hayman notes that Jung’s version of the dream in his memoir, published more than forty years after the event, differed from earlier accounts. Regardless, however, Hayman writes that for Jung, “the house represented the psyche, with unconscious additions. The upper floor stood for consciousness, and the ground floor for the first level of the unconscious. The cave represented the primitive world. The darkness of the lower levels meant they could rarely be illuminated by consciousness. The dream, he thought, ‘pointed to the foundations of cultural history—a history of successive layers of consciousness. My dream constituted a kind of structural diagram of the human psyche; it postulated that something of an altogether impersonal nature underlying the psyche.’ He says that this was his ‘first inkling of a collective a priori under the personal psyche.’” (Ronald Hayman, A Life of Jung, 116-117)