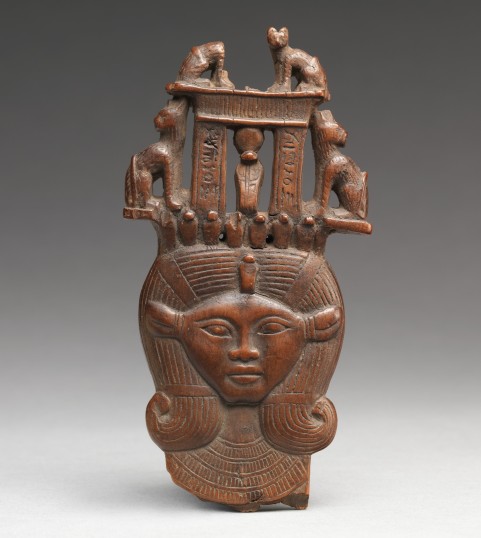 The name of Hathor immediately suggests that the Egyptians themselves had great difficulty in defining the essence of this complex deity. It describes the goddess in relation to the god Horus: ‘mansion of Horus’ is what her name means literally. But it symbolises Hathor as the ‘lady of the sky’ whose womb protected the hawk-god. She is the daughter of the sun-god Ra.

In art and architecture the goddess takes the following major forms: (a) Lithe lady on whose wig is a crown of cow horns and a sun disk. (b) Completely bovine as the ‘Great Wild Cow’. (c) As a pillar, the capital of which shows a human face, a wig (normally curling at the lappets on each side of her cheeks) but the ears of a cow.

Hathor can also be represented as a lioness, as a snake ‘who laughs with Wadjet’ or a sycamore. The papyrus was a plant sacred to her since the habitat of wild cattle was in the swamps by the Nile. A ritual of plucking up papyrus stalks was performed in her honour.

Her nature is predominantly benign but she does have a destructive streak which is best evidenced in the legend involving the narrowly avoided annihilation of the human race by Hathor as the ‘Eye of Ra’ (see under Sakhmet).

There was clearly a veneration of cow-goddesses in Predynastic Egypt but without hieroglyphs it is impossible to be certain if a cult belongs to Hathor or perhaps to Bat, the most likely candidate for the cow-heads on the Narmer Palette (c.3000 BC). By the beginning of the Old Kingdom there is indisputable archaeological and textual proof of the worship of Hathor. The valley temple of King Khafra (Dynasty IV) at Giza was placed in its southern sector under the protection of Hathor. Her temples are mentioned on the Old Kingdom annals on the Palermo Stone and royal ladies from the early Pyramid Age onwards take the title ‘priestess of Hathor’.

Hathor and the pharaoh

The king of Egypt is called ‘son of Hathor’. This of course leads to a complication since the king as Horus is the son of Isis. It seems most probable that Hathor is the original mother of the hawk-god in the cycle of myth where Horus and Seth are brothers. She

gave way to Isis when the legend was absorbed into the myth of Osiris, necessitating Horus to become the son of that goddess in order to gain the throne of Egypt. There is a further realignment in the relationship when Hathor becomes regarded as the wife of the sky-god Horus of Edfu.

The finest sculptural statement of the maternal concern that Hathor has for the king can be seen on the triad from Menkaura’s temple at Giza (Dynasty IV): the king is flanked by a local cow-goddess on one side while on the other his hand is protectively held by Hathor. In Dynasty XVIII on the west bank at Thebes at Deir el-Bahari, the Hathor chapel in Queen Hatshepsut’s temple shows two reliefs emphasising the relationship between the goddess and the ruler of Egypt.

In one the cow-goddess lovingly licks the hand of the enthroned monarch and in the other the Hathor-cow suckles the ruler. This latter motif occurs shortly after the reign of Queen Hatshepsut in a three-dimensional representation in a vaulted shrine originally at Deir el-Bahari but now in Cairo Museum: Hathor as a cow, papyrus stalks surrounding her head, provides her divine milk for Amenhotep II.

Hathor as a funerary goddess

This aspect of Hathor is especially prominent in western Thebes where the necropolis was under her safekeeping. As ‘lady of the west’ she is shown on stelae and funerary papyri as a cow leaving the desert in which the tombs have been cut to come down into 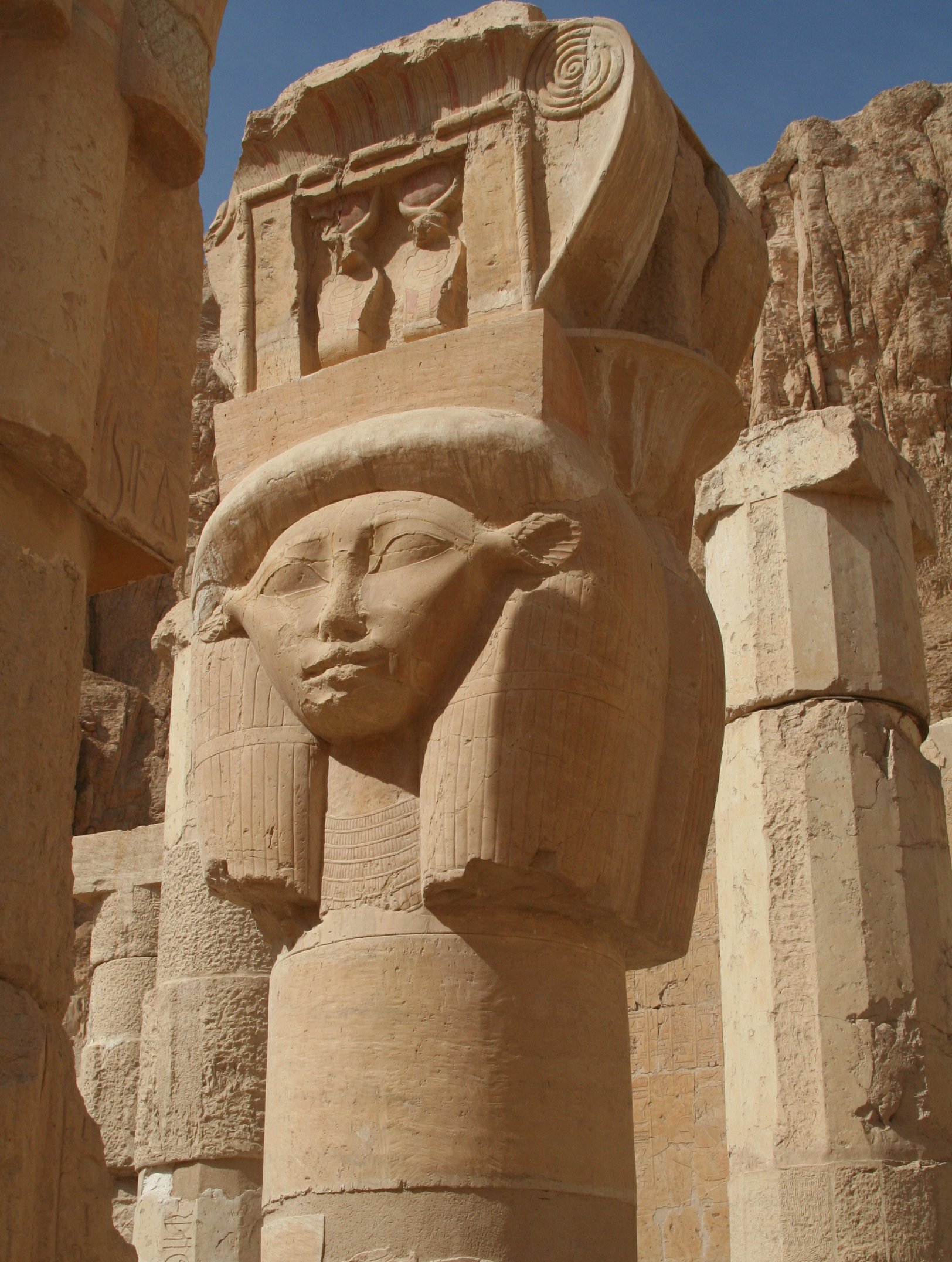 the papyrus marshes. This visually provides a link between the tomb and the life continuing in the Nile valley.

In tombs in the Valley of the Kings Hathor’s pre-eminence as a guardian of the western necropolis is left in no doubt since on decorated pillars around the sarcophagus chamber, such as those in the tomb of Amenhotep II, her figure outnumbers those of Osiris and Anubis. In the Book of the Dead the goddess as ‘lady of the headland of Manu’ (the western mountain) is said to be joined by the sun-god Ra as he sinks below the horizon. Her protection extends to practical help for the deceased in the Underworld: her outer garment, known as the ‘tjesten’, if possessed by someone in the Underworld, will give that person a safe path, particularly past enemies dwelling on the perilous Island of Fire.

Representations in tombs, such as that of Queen Nefertari (Dynasty XIX), and in the Book of the Dead show seven cows whose role is to determine the destiny of a child at birth. Each Hathor has her own name:

i. Lady of the universe

iii. You from the land of silence

vii. Your name flourishes through skill.

Alternative names for the seven Hathors can be found in mythological papyri:

i. Lady of the House of Jubilation

ii. + iii. Mistresses of the west

iv. + v. Mistresses of the east

These goddesses of fate are accompanied by the four rudders representing the cardinal points of the sky and are served by the ‘bull of the west, lord of eternity’. Although not specified in the papyrus as ‘seven’, the Hathors who foretell the fate of the young prince (Papyrus Harris 500), threatened with doom (probably avoided – the end of the tale is missing) from a crocodile, snake and a dog, are the same goddesses.

Occasionally in spells the seven Hathors protect the body from harm but it is usually the goddess Hathor in the singular who is connected with healing and childbirth. This role derives from her actions in the legend of the struggle between Horus and Seth for the Egyptian throne, restoring sight to Horus after his eyes have been torn out. Archaeological evidence of this aspect of Hathor can be found in her temple precinct at Dendera: rows of mudbrick cubicles were built near the ‘mammisi’ for sick visitors to lie in while purified water from the sacred lake ( previously run over an image of Hathor?) was poured over them to help effect a cure.

Goddess of love, music and dance

Hathor is the supreme goddess of sexual love in Ancient Egypt, immediately identified with Aphrodite by the Greeks when they came into contact with her cult. The turmoil or ecstasy which can result from physical desire are reflected in the conflicting forces of Hathor’s personality as a goddess of destruction as ‘Eye of Ra’ or a goddess of heavenly charm. In love poetry Hathor is called the ‘golden’ or ‘lady of heaven’. Concomitant with her connection with love is her ability to encourage sensual joy by music and dancing. In fact the child of Hathor and HORUS at the temple of Dendera is the god Ihy who really personifies musical jubilation. Dances in honour of Hathor are represented on the walls of courtiers’ tombs, and in the story of the return of Sinuhe to the Egyptian court after years abroad, the princesses perform an Hathoric dance to celebrate the occasion. In the myth of the contest for power between Horus and Seth it is the goddess herself, ‘lady of the southern sycamore’, who cures her father Ra of a fit of sulking by dancing naked in front of him until he bursts into laughter.

Music in the cult of Hathor was immensely important and there were two ritual instruments carried by her priestesses to express their joy in worshipping the goddess:

SISTRUM: The bronze sacred rattle ‘sesheshet’ in Egyptian – popular into the Roman world – which was shaken in honour of Hathor, consisted of a column-handle with coweared Hathor at the top surmounted by a loop, across the width of which stretched three or four horizontal bars piercing small disks that would jangle. There was also the ceremonial sistrum made of glazed composition terminating in a naos or shrine, which was meant to be a votive offering to the goddess.

MENAT: This is a necklace, thick with beads and a counterpoise long enough to be grasped in the hand, which was not worn but shaken by Hathor’s priestesses. The crypts in the main cult centre of Hathor in Egypt at Dendera give, in superbly carved wall reliefs, an idea of the sacred musical instruments and ritual objects and statues of the goddess that were originally contained in them. Also at Dendera (Ancient Egyptian ‘Iunet’), sacred to Hathor since at least the Old Kingdom, music accompanied the procession that brought the cult image of the goddess from the darkness of the sanctuary up onto the roof where a special chapel had been constructed for the ceremony of the union with the sun disk enabling Hathor to bathe in the rays of the sun-god.

The best indication of Hathor’s universality is the way in which foreign regions from which the Egyptians derived material benefit were regarded as personal domains of the goddess. In the Middle Kingdom she is called ‘lady of Byblos’ the long-established commercial centre for the timber trade. Excavations here have shown evidence of a cult to Hathor and her semitic counterpart Astarte. From the Old Kingdom another area beyond Egypt’s frontier becomes the province of Hathor, namely Nubia.

In the Dynasty VI the official Harkhuf came back from a southern expedition leading 300 donkeys laden with African produce such as panther skins, incense and ebony wood which are viewed as the gift of Hathor to the king. But the goddess’s closest and most important links abroad lie in the turquoise mines of the Sinai peninsula. In Dynasty III Hathor is ‘nebet mef kat’, i.e. ‘mistress of turquoise’ in rock inscriptions near the mines at Wadi Maghara. Later from Dynasty XII through the New Kingdom a splendid temple was built and added to in her honour at Serabit el-Khadim.