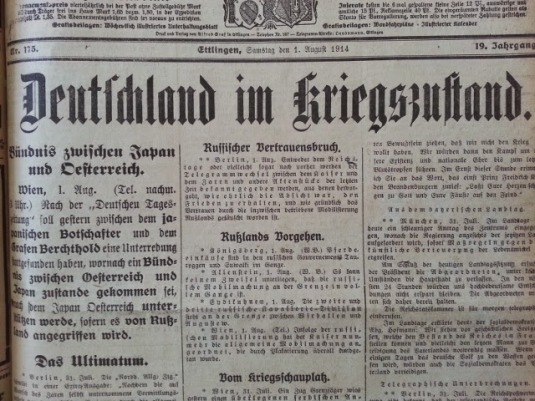 From Oswald Spengler’s Decline of the West, published just over a century ago. Our bad relationship with information and disinformation didn’t start with cable news or Twitter:

… Man does not speak to man; the press and its associate, the electrical news-service, keep the waking-consciousness of whole peoples and continents under a deafening drum-fire of theses, catchwords, standpoints, scenes, feelings, day by day and year by year, so that every Ego becomes a mere function of a monstrous intellectual Something. Money does not pass, politically, from one hand to the other. It does not turn itself into cards and wine. It is turned into force, and its quantity determines the intensity of its working influence….

To-day we live so cowed under the bombardment of this intellectual artillery that hardly anyone can attain to the inward detachment that is required for a clear view of the monstrous drama. The will-to-power operating under a pure democratic disguise has finished off its masterpiece so well that the object’s sense of freedom is actually flattered by the most thorough-going enslavement that has ever existed. The liberal bourgeois mind is proud of the abolition of censorship, the last restraint, while the dictator of the press—Northcliffe!—keeps the slave-gang of his readers under the whip of his leading articles, telegrams, and pictures. Democracy has by its newspaper completely expelled the hook from the mental life of the people. The book-world, with its profusion of standpoints that compelled thought to select and criticize, is now a real possession only for a few. The people reads the one paper, “its” paper, which forces itself through the front doors by millions daily, spellbinds the intellect from morning to night, drives the book into oblivion by its more engaging layout, and if one or another specimen of a book does emerge into visibility, forestalls and eliminates its possible effects by “reviewing” it.

What is truth? For the multitude, that which it continually reads and hears. A forlorn little drop may settle somewhere and collect grounds on which to determine “the truth”—but what it obtains is just its truth. The other, the public truth of the moment, which alone matters for effects and successes in the fact-world, is to-day a product of the Press. What the Press wills, is true. Its commanders evoke, transform, interchange truths. Three weeks of press work, and the truth is acknowledged by everybody. Its bases are irrefutable for just so long as money is available to maintain them intact. The Classical rhetoric, too, was designed for effect and not content—as Shakespeare brilliantly demonstrates in Antony’s funeral oration—but it did limit itself to the bodily audience and the moment. What the dynamism of our Press wants is permanent effectiveness. It must keep men’s minds continuously under its influence. Its arguments are overthrown as soon as the advantage of financial power passes over to the counter-arguments and brings these still oftener to men’s eyes and ears. At that moment the needle of public opinion swings round to the stronger pole. Everybody convinces himself at once of the new truth, and regards himself awakened out of error.

With the political press is bound up the need of universal school-education, which in the Classical world was completely lacking. In this demand there is an element—quite unconscious—of desiring to shepherd the masses, as the object of party politics, into the newspaper’s power-area. The idealist of the early democracy regarded popular education, without arrière pensée, as enlightenment pure and simple, and even to-day one finds here and there weak heads that become enthusiastic on the Freedom of the Press—but it is precisely this that smooths the path for the coming Caesars of the world-press. Those who have learnt to read succumb to their power, and the visionary self-determination of Late democracy issues in a thorough-going determination of the people by the powers whom the printed word obeys.

In the contests of to-day tactics consists in depriving the opponent of this weapon. In the unsophisticated infancy of its power the newspaper suffered from official censorship which the champions of tradition wielded in self-defense, and the bourgeoisie cried out that the freedom of the spirit was in danger. Now the multitude placidly goes its way; it has definitively won for itself this freedom. But in the background, unseen, the new forces are fighting one another by buying the press. Without the reader’s observing it, the paper, and himself with it, changes masters. Here also money triumphs and forces the free spirits into its service. No tamer has his animals more under his power. Unleash the people as reader-mass and it will storm through the streets and hurl itself upon the target indicated, terrifying and breaking windows; a hint to the press-staff and it will become quiet and go home. The Press to-day is an army with carefully organized arms and branches, with journalists as officers, and readers as soldiers. But here, as in every army, the soldier obeys blindly, and war-aims and operation-plans change without his knowledge. The reader neither knows; nor is allowed to know, the purposes for which he is used, nor even the role that he is to play. A more appalling caricature of freedom of thought cannot be imagined. Formerly a man did not dare to think freely. Now he dares, but cannot; his will to think is only a willingness to think to order, and this is what he feels as his liberty.

And the other side of this belated freedom—it is permitted to everyone to say what he pleases, but the Press is free to take notice of what he says or not. It can condemn any” truth” to death simply by not undertaking its communication to the world—a terrible censorship of silence, which is all the more potent in that the masses of newspaper readers are absolutely unaware that it exists.