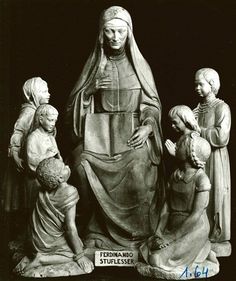 They were a group of well-born Lombardian ladies, led by Angela Merici, who came together to educate poor girls in the northern Italian city of Brescia. So far as I can ascertain, no one had ever thought to do this before them. In the same period, Anabaptist communities in Germany, Switzerland, and Holland were beginning to encourage universal “biblical literacy,” but this, often enough, referred to memorization of biblical texts rather then to actual literacy—and, in any case, the Anabaptist program was not especially directed toward poor girls. As we saw in the story of Thomas More, the education of girls, even those of educated households, was not a value in European society. The education of poor girls was an unthinkable innovation. What society had against the education of females was, of course, that it would put the weapons of knowledge into their hands: it would make them too much like males, able to hold real power over others.

One recalls the remarkable result of the second communication revolution, in which, because of the simplicity of the alphabet, it became possible for anyone, even a slave, to learn to read. So even slaves learned to read in the time of Moses and after, but another three thousand years would pass before the daughters of the poor would have the treasures of literacy opened to them. Their champion was a most unlikely warrior: a tiny, though pretty and charming, spinster.

Angela Merici wished to form an elective association of women like herself, whose life experiences gave them sympathy for others, especially for other females of scant means. Angela, orphaned at then, had lost her last remaining protector, her beloved elder sister, when she was thirteen. These losses, which might have turned a psychologically weaker girl into a broken woman, strengthened Angela: she sought solace in prayer and in dedication to others in need. She became a visionary in the strict sense: one who saw in advance that the work of God had assigned her, as well as others, to accomplish. Her meeting with Pope Clement VII in 1525 resulted in his inviting her to lead a congregation of nursing nuns. Angela turned him down, something a lady, well born or not, was hardly in a position to do; but she knew the pope’s proposal wasn’t what God had in mind for her.

Angela’s association in Brescia took as its spiritual patron Saint Ursula, a wholly legendary figure who served nonetheless as the medieval patron of universities. It was this connection of a female figure to university education that attracted the women, who came to be called Ursulines. Angela died in 1540, and in subsequent centuries, under subsequent popes, the Ursulines would be hemmed in by many papal rules about the conduct of their lives. Eventually, they were forced to assume the strict identity of nuns, which had not been their original intent. But their connection to the education of girls and women would never falter. Throughout Europe and at many of the sites of the new worldwide Catholic missions, the Ursulines built and staffed schools and universities for women, never entirely abandoning their original focus on the education of poor girls.