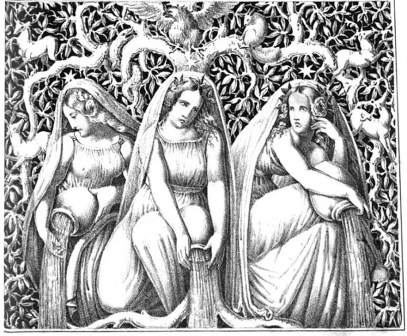 Then spoke Gangleri:  “Where is the chief center or holy place of the gods?”

High replied: “It is at the ash Yggdrasil. There the gods must hold their courts each day.”

Then spoke Gangleri: “What is there to tell about that place?”

Then said Just-as-high: “The ash is of all trees the biggest and best. Its branches spread out over the world and extend across the sky. Three of the tree’s roots support it and extend very, very far. One is among the Æsir, the second among the frost-giants, where the Ginnungagap once was. The third extends over Niflheim, and under that root is Hvergelmir, and Nidhogg gnaws the bottom of the root. But under the root that reaches towards the frost-giants, there is where Mimir’s well is, which has wisdom and intelligence contained in it, and the master of the well is called Mimir. He is full of learning because he drinks of the well from the horn Giallarhorn. All-father went there and asked for a single drink from the well, but he did not get one until he placed his eye as a pledge. Thus is says in Voluspa:

I know it all, Odin, where you deposited your eye, in that renowned well of Mimir. Mimir drinks mead every morning from Val-father’s pledge. Know you yet, or what?

The third root of the ash extends to heaven, and beneath that root is a well which is very holy, called Weird’s well. There the gods have their court. Every day the Æsir ride there up over Bifrost. It is also called As-bridge. The names of the Æsir’s horses are as follows: best is Sleipnir, he is Odin’s, he has eight legs. Second is Glad, third Gyllir, fourth Glær, fifth Skeidbrimir, sixth Silfrtopp, seventh Sinir, eighth Gils, ninth Falhofnir, tenth Gulltopp, Lettfeti eleventh. Baldr’s horse was burned with him. And Thor walks to the court and wades rivers whose names are:

Kormt and Ormt and two Kerlaugs, these shall Thor wade every day when he is to judge at the ash Yggdrasil, for As-bridge burns all with flame, the holy waters boil.

Then spoke Ganlgerli: “Does fire burn over Bifrost?”

High said: “The red you see in the rainbow is burning fire. The frost-giants and mountain-giants would go up into heaven if Bifrost was crossable by everyone that wanted to go. There are many beautiful places in heaven and everywhere there has divine protection round it. There stands there one beautiful hall under the ash by the well, and out of this hall come three maidens whose named are Weird, Verdandi, Skuld. These maidens shape men’s lives. We call them norns. There are also other norns who visit everyone when they are born to shape their lives, and these are of divine origin, though others are of the race of elves, and a third group are of the race of dwarfs, as it says here:

Then spoke Gangleri: “If norns determine the fates of men, they allot terribly unfairly, when some have a good and prosperous life, and some have little success or glory, some a long life, some short.”

High said: “Good norns, one of noble parentage, shape good lives, but as for those people that become the victims of misfortune, it is evil norns that are responsible.”

Then spoke Gangleri: “What other particularly notable things are there to tell about the ash?”

High said: “There is a great deal to tell of it. There is an eagle sits in the branches of the ash, and it has knowledge of many things, and between its eyes sits a  hawk called Vedrfolnir. A squirrel called Ratatosk runs up and down through the ash and carries malicious messages between the eagle and Nidhogg.

Four stags run in the branches of the ash and feed on the foliage. Their names are: Dain, Dvalin, Duneyr, Durathror. And there are so many snakes in Hvergelmir with Nidhogg that no tongue can enumerate them. As it says:

The ash Yggdrasil suffers hardships more than people realize. Stag bites above, and at the sides it rots, Nidhogg eats away at it below.

Also it is said:

More snakes lie beneath the ash Yggdrasil than any old fool thinks. Goin and Moin—they are Grafvitnir’s sons—Grabak and Grafvollud, Ofnir and Svafnir I think will for ever mar the tree’s twigs.

It is also said that the norns that dwell by Weird’s well take water from the well each day and with it he mud that lies round the well and pour it up over the ash so that its branches may not rot or decay. And this water is so holy that all things that come into that well go as white as the membrane called the skin that lies round the inside of an eggshell, as it says here:

I know an ash—its name is Yggdrasil, high tree, holy—drenched with white mud. From it come the dews that fall in the valleys. It stands forever green above Weird’s well.

The dew that falls from it on to the earth, this is what people call honeydew, and from it bees feed. Two birds feed in Weird’s well. They are called swans, and from these birds has come that species of bird that has that name.

– from the “Gylfaginning” in the Prose Edda, translated by Anthony Faulkes, Edda, 17-19

One thought on “The Great Myths #56: The Early History of Yggdrasil (Norse)” Leave a comment ›