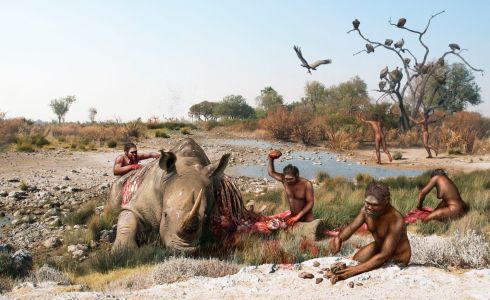 From Steven Mithen’s The Prehistory of the Mind:

There is good circumstantial evidence that H. habilis [2.1 to 1.5 million years ago] would have been living in larger groups than his ancestors. If we again look at modern primates, there appear to be two ecological situations in which primates choose to live in larger groups, and suffer the accompanying social challenges. One of these is when they face a high risk from predators. In that case it is better to be with some friends because then you can work together to fend off an attack, or failing that you might hope that the attacker will eat one of your friends rather than yourself. Now we know that our earliest ancestors did become the prey of carnivores—we have skulls pierced with the teeth marks of leopards to prove it. And we know that their predilection for morsels of meat from carcasses may have been pitting them against hyenas. At just 1.5 m (under 5 ft) tall and 50 kg (110 lbs) in weight at most, and with no more than a few lumps of stone to throw, they were not particularly well equipped for hand-to-hyena combat. So group living seems a necessity for H. habilis.

The other ecological condition which favors group living is when food comes in large parcels that are irregularly distributed around the landscape. Finding these may not be easy, but once found there is plenty of food to be had. So it is often beneficial to live within a relatively large group, search for food packages individually or in pairs, but then share food with other group members. On the next day it may be someone else who is the lucky one and finds the food. This scenario is likely to apply to H. habilis searching for carcasses on the savannahs of East Africa 2 million years ago….

We have therefore good ecological criteria for believing that H. habilis would be choosing to live in relatively large groups, and their large brain size implies that they had the social intelligence to do so. In other words the enlarged brain of the H. habilis suggests that the domain of social intelligence has become yet more powerful and complex. What might the new elements have been? We can only speculate, but one possibility is that they could cope with more “orders of intentionality” than could their chimpanzee-like ancestors.

– Steven Mithen, The Prehistory of the Mind: The Cognitive Origins of Art and Science, 107-108