Here is one the my favorite moments from a writer’s life, followed by one of the saddest. Only seven months apart, they typify the pendulum of great highs and awful lows in Hart Crane’s life. Desperate to write, and giving in his letters as articulate a record of that burning desire as any writer I know, it is hard not to feel affection for him in either of the following anecdotes: you are happy that he had this one truly supreme moment of spiritual and physical belonging; but you are not surprised at his suicide, either, or the method he chose. 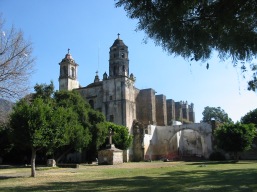 [September, 1931, in Tepotzlán, Mexico] They’d arrived, it turned out, on the eve of the Feast of Tepoztecatl, the ancient Aztec god of pulque, corn liquor. Crane had noticed the impressive ruins of the god’s temple, destroyed centuries earlier by the Spanish, set high on the cliff overlooking one end of the valley. The following day, he and Rourke went out in the cornfields, looking for signs of the older Indian civilization that had flourished here before the coming of the Spanish. Together, they found several fragments of Aztec idols that had been turned over by plows. When they showed these to the elders, they were told some of the legends surrounding Tepoztecatl, even as they were served hot coffee laced with pulque. What wonderful people these Indians were, Crane mused, who “still stuck to their ancient rites despite all the oppression of the Spaniards for near 400 years.” In writing The Bridge, except for the New York City cabdriver named Maquokeeta he’d talked with one night, he had had to imagine the Indian through an ersatz American myth and history, and the poem had suffered accordingly. Now he was coming into direct contact with the descendants of the Aztecs. The descent into the essential soil of Mexico had begun in earnest.

That evening, as the sun was setting, Crane and Rourke were drinking tequila at an outdoor coffee bar when they noticed a light on the roof of the cathedral. Suddenly, a drum and flute began playing “the most stirring and haunting kind of savage summons,” and they found themselves running toward the cathedral and up the church stairs onto the roof. What they found were several groups of older Indian men—some twenty in all—standing about with lanterns and talking while the drums and flute played on. The musicians, faces turned toward the ruined temple atop its precipice two miles away, played on and on, ceasing only when the sextons rang the great cathedral bells, which called the faithful to prayer at fifteen-minute intervals. When the bells ceased, the drums and flutes resumed. For two hours, this antiphon of response and counterresponse between cathedral gong and tribal flute and drum continued. Then rockets began firing from the parapets of the cathedral, answered by rockets going off from the temple.

“Sitting there,” Crane would remember, “on top of that church, with the lightning playing on one horizon, a new moon sinking on the opposite, and with millions of stars overhead and between and with that strange old music beating in one’s blood—it was like being in the land of Oz.” Two musics, two worlds, each at odds with the other, become now a single reality. “There really did not seem to be a real conflict that amazing night,” Crane would tell Bill Wright afterwards, for he’d seen these same Indian elders at mass as well. To witness, as he’d been privileged to witness, such contradictory forces reconciled in the enactments of music! Finally, when the music ended at nine, Crane invited the elders to the bar for a glass of tequila before retiring. In turn they invited the two Americans to join them at 3:00 a.m., when the bells would once again begin ringing in the tower and the drums and flute would play in antiphonal response until sunrise.

It was the music that woke Crane, but not until 5:00 a.m., when he poked Rourke and they ran back to the cathedral for more hot coffee and pulque and to “see the sun rise over that marvelous valley to such ringing of bells and wild music as I never expect to hear again.” Crane was struck by the presence of an ancient Aztec drum, “a large wooden cylinder, exquisitely carved and showing a figure with animal head, upright, and walking through thick woods.” A pre-Conquest drum, “guarded year after year from the destruction of the priests and conquerors, that how many hundreds of times had been beaten to propitiate the god.” And here it was, the thing itself, lying on its side, on the roof of the cathedral, while an elder, seated with legs folded, struck it with two heavily padded drumsticks. The night before, this same drum had echoed through the valley from its place of honor in the distant ruined temple. Now it had been brought here to greet the rising god.

And then, as the sun began to come up and the excitement mounted to a near-impossible pitch, the man who had been playing the ancient drum suddenly placed two sticks in Crane’s hands and nodded. Crane was stunned. Never had he heard of any American being allowed to participate like this in the pulque ceremony before. “It seemed too good to be true, really,” he would tell Bill Wright, “that I, who had expected to be thrown off the roof when I entered the evening before, should now be invited to actually participate.” Somehow, he managed to maintain “the exact rhythm with all due accents” he’d been listening to for the last several hours, even working in his own rift, “based on the lighter tattoo of the more modern drum of the evening before.” And though the heavy drumsticks soon tired his forearms, he believed he’d been a hit, and that the old men would have embraced him had decorum allowed. Several, in fact, did put their arms around his shoulders and walked back and forth with him the entire length of the roof as the bells rang and “the whole place seemed to go mad in the refulgence of full day.”

Wonderful as it had been to hear those great bells ringing, however, it had been “inestimably better to see the sextons wield the hammers, swinging on them with the full weight of their entire bodies like frantic acrobats,” even as rockets burst into the bell-thronged sunrise before they disappeared. There would be other memories of Tepotzlán: bathing with an Indian lad in a mountain pool and meeting the vicar of the cathedral. But these were dying falls compared to what he had experienced atop the cathedral, where he had helped summon God into this old upon old, ever fresh New World. (383-385) 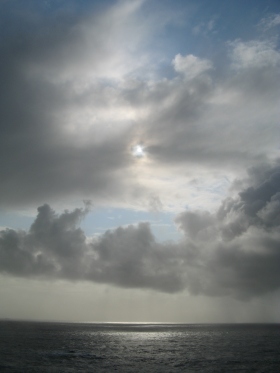 [April 27, 1932, on the ship Orizaba, ten miles each of the Florida coast, 275 miles north of Havana] ….A few minutes before noon, there was a knock at her door. It was Crane, still in pajamas, but wearing a light topcoat over them. She told him to shave and get dressed and join her for lunch. “I’m not going to make it, dear,” he told her, his voice already drifting. “I’m utterly disgraced.” Nonsense, she told him. How much better he’d feel once he was dressed. “All right, dear,” he said. He leaned over, kissed her goodbye, and closed the door behind him. Then he walked along the promenade deck toward the stern of the ship.

Gertrude Vogt, one of the passengers sitting on deck chairs by the stern, was waiting along with others to hear the results of the ship’s pool, which would be announced at noon. She looked up to see a man walking toward her. Earlier that day, she would recall forty years later, one of the ship’s officers had told her and some of the others that a man “had been in the sailors’ quarters the previous night, trying to make one of the men, and had been badly beaten.” Now she watched as that man, in coat and pajamas, walked up to the railing, took off his coat, and folded it over the railing. Then he “placed both hands on the railing, raised himself on his toes, and … dropped back again. We all fell silent and watched him, wondering what in the world he was up to. Then, suddenly, he vaulted over the railing and jumped into the sea. For what seemed like five minutes, but was more like five seconds, no one was able to move; then cries of ‘man overboard’ went up. Just once I saw Crane, swimming strongly, but never again.” (420)