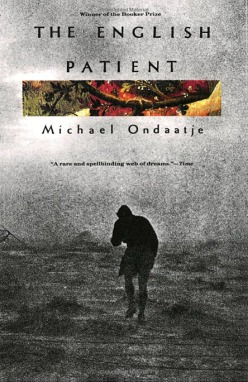 Our love for certain books or movies or pieces of music are so intense that we like to imagine our preference for them rises to the level of objectivity. The wonderfully grouchy critic Harold Bloom, for instance, praises the poetry of Hart Crane to no end; but, just as effusively, he can relate the memory of receiving Crane’s Collected Poems as a child, so that his adulation is just as bound up with the concentrated power of that childhood moment.

Almost as important as the work of art itself, then, it matters just as much when you first encounter it; and for some reason, Michael Ondaatje’s novel The English Patient has always been circling around me: I heard of the movie version by chance in high school, and bits from the novel showed up months later on the SATs. When the movie won an Oscar I finally saw it and also bought the score, which I listened to nonstop while first reading through Dubliners—and there are still a few songs from it which sound like nothing else but Joyce’s sad stories. And since the novel and the movie involves a love affair, both have also colored and become intertwined with nearly every relationship I’ve ever had.

A friend from back in high school recently wrote me to ask how it is we can express the ineffable in prose or poetry, the weight lived experience, and our backward glance? Ondaatje’s novel gets as close as anything I know. Read the following passages from the novel, and see if you don’t agree. They come near the end of the book, when the main character is forced to leave his lover, wounded in a plane crash, before he wanders across the Egyptian desert in search of help.

And all the names of the tribes, the nomads of faith who walked in the monotone of the desert and saw brightness and faith and colour. The way a stone or found metal box or bone can become loved and turn eternal in a prayer. Such glory of this country she enters now and becomes part of. We die containing a richness of lovers and tribes, tastes we have swallowed, bodies we have plunged into and swum up as if rivers of wisdom, characters we have climbed into as if trees, fears we have hidden in as if caves. I wish for all this to be marked on my body when I am dead. I believe in such cartography—to be marked by nature, not just to label ourselves on a map like the names of rich men and women on buildings. We are communal histories, communal books. We are not owned or monogamous in our taste or experience. All I desired was to walk upon such an earth that had no maps. I carried Katharine Clifton into the desert, where there is the communal book of moonlight. We were among the rumour of wells. In the palace of winds.

Her glare was permanent. I could not move out of the target of that gaze. I will be the last image she sees. The jackal in the cave who will guide and protect her, who will never deceive her.

There are a hundred deities associated with animals, I tell her. There are the ones linked to jackals—Anubis, Duamutef, Wepwawet. These are creatures who guide you into the afterlife—as my early ghost accompanied you, those years before we met. All those parties in London and Oxford. Watching you. I sat across from you as you did schoolwork, holding a large pencil. I was there when you met Geoffrey Clifton at two a.m. in the Oxford Union Library. Everybody’s coats were strewn on the floor and you in your bare feet like some heron picking your way among them. He is watching you but I am watching you too, though you miss my presence, ignore me. You are at an age when you see only good-looking men. You are not yet aware of those outside your sphere of grace. The jackal is not used much at Oxford as an escort. Whereas I am the man who fasts until I see what I want. The wall behind you is covered in books. Your left hand holds a long loop of pearls that hangs from your neck. Your bare feet picking their way through. You are looking for something. You were more plump in those days, though aptly beautiful for university life.

There are three of us in the Oxford Union Library, but you find only Geoffrey Clifton. It will be a whirlwind romance. He has some job with archaeologists in North Africa, of all places. “A strange old coot I’m working with.” Your mother is quite delighted at your adventure.

But the spirit of the jackal, who was the “opener of the ways,” whose name was Wepwawet or Almásy, stood in the room with the two of you. My arms folded, watching your attempts at enthusiastic small talk, a problem as you both were drunk. But what was wonderful was that even within the drunkenness of two a.m., each of you somehow recognized the more permanent worth and pleasure of the other. You may have arrived with others, will perhaps cohabit this night with others, but both of you have found your fates.

At three a.m. you feel you must leave, but you are unable to find one shoe. You hold the other in your hand, a rose-coloured slipper. I see one half buried near me and pick it up. The sheen of it. They are obviously favourite shoes, with the indentation of your toes. Thank you, you say accepting it, as you leave, not even looking at my face.

I believe this. When we meet those we fall in love with, there is an aspect of our spirit that is historian, a bit of a pedant, who imagines or remembers a meeting when the other had passed by innocently, just as Clifton might have opened a car door for you a year earlier and ignored the fate of his life. But all parts of the body must be ready for the other, all atoms must jump in one direction for desire to occur.

I have lived in the desert for years and I have come to believe in such things. It is a place of pockets. The trompe l’oeil of time and water. The jackal with one eye that looks back and one that regards the path you consider taking. In his jaws are pieces of the past he delivers to you, and when all of that time is fully discovered it will prove to have been already known.