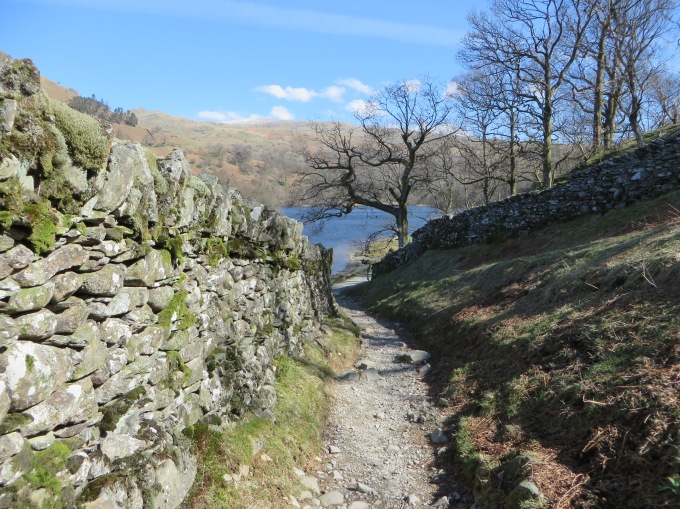 Excerpts from Book 11 of  Wordsworth’s 1805 Prelude, which he calls “Imagination, How Impaired and Restored.” Other excerpts are here.

Long time hath man’s unhappiness and guilt
Defained us: with what dismal sights beset
For the outward view, and inwardly oppressed
With sorrow, disappointment, vexing thoughts,
Confusion of the judgement, zeal decayed –
And last, utter loss of hope itself
And things to hope for. Not with these began
Our song, and not with these our song must end.
Ye motions of delight, that through the fields
Stir gently, breezes and soft airs that breathe
The breath of paradise, and find your way
To the recesses of the soul; ye brooks
Muttering along the stones, a busy noise
By day, a quiet one in silent night;
And you, ye groves, whose ministry it is
To interpose the covert of your shades,
Even as a sleep, betwixt the heart of man
And the uneasy world – ’twixt man himself,
Not seldom, and his own unquiet heart –
Oh, that I had a music and a voice
Harmonious as your own, that I might tell
What ye have done for me. The morning shines,
Nor heedeth man’s perverseness; spring returns –
I saw the spring return, when I was dead
To deeper hope, yet had I joy for her
And welcomed her benevolence, rejoiced
In common with the children of her love,
Plants, insects, beasts in field, and birds in bower.
So neither were complacency, nor peace,
Nor tender yearnings, wanting for my good
Through those distracted times: in Nature still
Glorying, I found a counterpoise in her,
Which, when the spirit of evil was at height,
Maintained for me a secret happiness.
Her I resorted to, and loved so much
I seemed to love as much as heretofore –
And yet this passion, fervent as it was,
Had suffered change; how could there fail to be
Some change, if merely hence, that years of life
Were going on, and with them loss or gain
Inevitable, sure alternative?

Oh soul of Nature, excellent and fair,
That didst rejoice with me, with whom I too
Rejoiced, through early youth, before the winds
And powerful waters, and in lights and shades
That marched and countermarched about the hills
In glorious apparition, now all eye
And now all ear, but ever with the heart
Employed, and the majestic intellect!
O soul of Nature, that dost overflow
With passion and with life, what feeble men
Walk on this earth, how feeble have I been
When thou wert in thy strength!

Amid the turns and counter-turns, the strife
And various trials of our complex being
As we grow up, such thralldom of that sense
Seems hard to shun; and yet I knew a maid,
Who, young as I was then, conversed with things
In higher style. From appetites like these
She, gentle visitant, as well she might,
Was wholly free. Far less did critic rules
Or barren intermeddling subtleties
Perplex her mind, but, wise as women are
When genial circumstance hath favored them,
She welcomed what was given, and craved no more.
Whatever scene was present to her eyes,
That was the best, to that she was attuned
Through her humility and lowliness,
And through a perfect happiness of soul,
Whose variegated feelings were in this
Sisters, that they were each some new delight.
For she was Nature’s inmate: her the birds,
And every flower she met with, could they but
Have known her, would have loved. Methought such charm
Of sweetness did her presence breath around
That all the trees, and all the silent hills
And every thing she looked on, should have had
An intimation how she bore herself
Towards them and to all creatures. God delights
In such a being, for her common thoughts
Are piety, her life is blessedness.

Even like this maid, before I was call forth
From the retirement of my native hills
I loved whate’er I saw, nor lightly loved,
But fervently – did never dream of aught
More grand, more fair, more exquisitely framed,
Than those few nooks to which my happy feet
Were limited. I had not at that time
Lived long enough, nor in the least survived
The first diviner influence of this world
As it appears to unaccustomed eyes.
I worshipped then among the depths of things
As my soul bade me; could I then take part
In aught but admiration, or be pleased
With any thing but humbleness and love?
I felt, and nothing else; I did not judge,
I never thought of judging, with the gift
Of all this glory filled and satisfied –
And afterwards, when through the gorgeous Alps
Roaming, I carried with me the same heart.
In truth, this degradation – howsoe’er
Induced, effect in whatsoe’er degree
Of custom that prepares such wantonness
As makes the greatest things give way to least,
Or any other cause that hath been named,
Or, lastingly, aggravated by the times,
Which with their passionate sounds might often make
The milder minstrelsies of rural scenes
Inaudible – was transient. I had felt
Too forcibly, too early in my life,
Visitings of imaginative power
For this to last: I shook the habit off
Entirely and for ever, and again
In Nature’s presence stood, as I stand now,
A sensitive, and a creative soul.

There are in our existence spots of time,
Which with distinct preeminence retain
A renovating virtue, whence, depressed
By false opinion and contentious thought,
Or aught of heavier or more deadly weight
In trivial occupations and the rounds
Of ordinary intercourse, our minds
Are nourished and invisibly repaired –
A virtue, by which pleasure is enhanced,
That penetrates, enables us to mount
When high, more high, and lifts us up when fallen.
This efficacious spirits chiefly lurks
Among those passages of life in which
We have had deepest feeling that the mind
Is lord and master, and that outward sense
Is but the obedient servant of her will
Such moments, worthy of gratitude,
Are scattered everywhere, taking their date
From our first childhood – in our childhood even
Perhaps are most conspicuous. Life with me,
As far as memory can look back, is full
Of this beneficent influence.
At a time
When scarcely (I was not then six years old)
My hand could hold a bridle, with proud hopes
I mounted, and we rode towards the hills:
We were a pair of horsemen – honest James
Was with me, my encourager and guide.
We had not travelled long ere some mischance
Disjoined me from my comrade, and, through fear
Dismounting, down the rough and stony moor
I led my horse, and stumbling on, at length
Came to a bottom where in former times
A murderer had been hung in iron chains.
The gibbet-mast was mouldered down, the bones
And iron case were gone, but on the turf
Hard by, soon after that fell deed was wrought,
Some unknown hand had carved the murderer’s name.
The monumental writing was engraven
In times long past, and still from year to year
By superstition of the neighbourhood
The grass is cleared away; and to this hour
The letters are all fresh and visible.
Faltering, and ignorant where I was, at length
I chanced to espy those characters inscribed
On the green sod: forthwith I left the spot,
And, reascending the bare common, saw
A naked pool that lay beneath the hills,
The beacon on the summit, and more near,
A girl who bore a pitcher of her head
And seemed with difficult steps to force her way
Against the blowing wind. It was, in truth,
An ordinary sight, but I should need
Colours and words that are unknown to man
To paint the visionary dreariness
Which, while I looked all round for my lost guide,
Did at that time invest the naked pool,
The beacon on the lonely eminence,
The woman, and her garments vexed and tossed
By the strong wind. When, in the blessèd season,
With those two dear ones – to my heart so dear –
When, in the blessed time of early love,
Long afterwards I roamed about
In daily presence of this very scene,
Upon the naked pool and dreary crags,
And on the melancholy beacon, fell
The spirit of pleasure and youth’s golden gleam –
And think ye not with radiance more divine
From these remembrances, and from the power
They left behind? So feeling comes in aid
Of feeling, and diversity of strength
Attends us, but once we have been strong,

Oh mystery of man, from what a depth
Proceed thy honours! I am lost, but see
In simple childhood something of the base
On which they greatness stands – but this I feel,
That from thyself it is that thou must give,
Else never canst receive. The days gone by
Come back upon me from the dawn almost
Of life; the hiding-places of my power
Seem open, I approach, and then they close;
I see by glimpses now, when age comes on
May scarcely see at all; and I would give
While yet we may, as far as words can give,
A substance and al ife to what I feel:
I would enshrine the spirit of the past
For future restoration. Yet another
Of these to me affecting incidents,
With which we will conclude.

One Christmas-time,
The day before the holidays began,
Feverish, and tired, and restless, I went forth
Into the fields, impatient for the sight
Of those two horses which should bear us home,
My brothers and myself. There was a crag,
An eminence, which from the meeting-point
Of two highways ascending overlooked
At least a long half-mile of those two roads,
By each of which the expected steeds might come –
The choice uncertain. Thither I repaired
Up to the highest summit. ’Twas a day
Stormy, and rough, and wild, and on the grass
I sate half sheltered by a naked wall.
Upon my right hand was a single sheep,
A whistling hawthorn on my left, and there,
With those companions at my side, I watched,
Straining my eyes intensely as the mist
Gave intermitting prospect of the wood
And plain beneath. Ere I to school returned
That dreary time, ere I had been ten days
A dweller in my father’s house, he died,
And I and my two brothers, orphans then,
Followed his body to the grave. The event,
With all the sorrow which it brought, appeared
A chastisement; and when I called to mind
That day so lately past, when from the crag
I looked in such anxiety of hope,
With trite reflections of morality,
Yet in the deepest passion, I bowed low
To God who thus corrected my desires.
And afterwards the wind and sleety rain,
And all the business of the elements,
The single sheep, and the one blasted tree,
And the bleak music of that old stone wall,
The noise of wood and water, and the mist
Which on the line of each of those two roads
Advanced in such indisputable shapes –
All these were spectacles and sounds to which
I often would repair, and thence would drink
As at a fountain. And I do not doubt
That in this later time, when storm and rain
Beat on my roof at midnight, or by day
When I am in the woods, unknown to me
The workings of my spirit thence are brought.

Thou wilt not languish here, O friend, for whom
I travel in these dim uncertain ways –
Thou wilt assist me, as a pilgrim gone
In quest of highest truth. Behold me then
Once more in Nature’s presence, thus restored,
Or otherwise, and strengthened once again
(With memory left of what had been escaped)
To habits of devoutest sympathy.