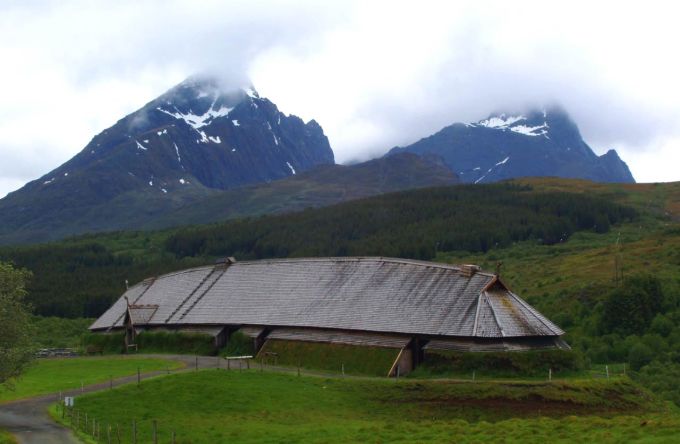 Then from the moor     under misty hillsides,
Grendel came gliding     girt with God’s anger.
The man-scather sought     someone to snatch
from the high hall.     He crept under clouds
until the caught sight     of the king’s court
whose gilded gables     he knew at a glance.
He often had haunted     Hrothgar’s house;
but he never found,     before or after,
hardier hall-thanes     or harder luck.
The joyless giant     drew near the door,
which swiftly swung back     at the touch of his hand
though bound and fastened     with forge-bent bars.
The building’s mouth     had been broken open,
and Grendel entered     with ill intent.
Swollen with fury,     he stalked over flagstones
and looked round the manse     where many men lay.
An unlovely light     most like a flame
flashed from his eyes,     flared through the hall
at young soldiers dozing     shoulder to shoulder,
comradely kindred.     The cruel creature laughed
in his murderous mind,     thinking how many
now living would die     before the day dawned,
how glutted with gore     he would guzzle his fill.
It was not his fate     to finish the feast
he foresaw that night.
Soon the Stalwart,
Hygelac’s kinsman,     beheld how the horror,
not one to be idle,     went about evil.
For his first feat     he suddenly seized
a sleeping soldier,     slashed at the flesh,
bit through bones     and lapped up the blood
that gushed from veins     as he gorged on gobbets.
Swiftly he swallowed     those lifeless limbs,
hands and feet whole;     then he headed forward
with open palm     to plunder the prone.
One man [Beowulf] angled     up on his elbow:
the fiend soon found     he was facing a foe
whose hand-grip was harder     than any other
he ever had met     in all middle-earth.
Cravenly cringing,     coward at heart,
he longed for a swift     escape to his lair,
he bevy of devils.     He never had known
from his earliest days     such awful anguish.

The captain, recalling     his speech to the king,
straightaway stood     and hardened his hold.
Fingers fractured.     The fiend spun round;
the solder stepped closer.     Grendel sought
somehow to slip     that grasp and escape,
flee to the fens;     but his fingers were caught
in too fierce a grip.     His foray had failed;
the harn-wreaker rued     his raid on Heorot.
From the hall of the Danes     a hellish din
beset every soldier     outside the stronghold,
louder than laughter     of ale-sodden earls.
A wonder it was     the wine-hall withstood
this forceful affray     without falling to earth.
That beautiful building     was firmly bonded
by iron bands     forged with forethought
inside and out.     As some have told it,
the struggle swept on     and slammed to the floor
many mead-benches     massive with gold.
No Scylding elders     ever imagined
that any would harm     their elk-horned hall,
raze what they had wrought,     unless flames arose
to enfold an consume it.     Frightful new sounds
burst from the building,     unnerved the North-Danes,
each one and all     who heard those outcries
outside the walls.     Wailing in anguish,
the hellish horror,     hateful to God,
sang his dismay,     seized by the grip
of a man more mighty     than any then living.
That shielder of men     meant by no means
to let the death-dealer     leave with his life,
a life worthless     to anyone elsewhere.
Then the young soldiers     swung their old swords
again and again     to save their guardian,
their kingly comrade,     however they could.
Engaging with Grendel     and hoping to hew him
from every side,     they scarcely suspected
that blades wielded     by worthy warriors
never would cut     to the criminal’s quick.
The spell was spun     so strongly about him
that the finest iron     of any on earth,
that sharpest sword-edge     left him unscathed.
Still he was soon    to be stripped of his life
and sent on a sore     sojourn to Hell.
The strength of his sinews     would serve him no more;
no more would he menace     mankind with his crimes,
his grudge against God,     for the high-hearted kinsman
of King Hygelac     had hold of his hand.
Each found the other     loathsome in life;
but the murderous man-bane     got a great wound
as tendons were torn,     shoulder shorn open,
and bone-locks broken.     Beowulf gained
glory in war;     and Grendel went off
bloody and bent     to the boggy hills,
sorrowfully seeking     his dreary dwelling.
Surely he sensed     his life-span was spent,
his days upon days;     but the Danes were grateful:
their wish was fulfilled     after fearsome warfare.

Wise and strong-willed,     the one from afar
head cleansed Heorot,     hall of Hrothgar.
Great among Geats,     he was glad of his night-work
ending the evil,     his fame-winning feat,
fulfilling his oath     to aid the East-Danes,
easing their anguish,     healing the horror
they suffered so long,     no small distress.
As token of triumph,     the troop-leader hung
the shorn-off shoulder     and arm by its hand:
the grip of Grendel    swung from the gable!
Many a warrior     met in the morning
around Hrothgar’s hall,     so I have heard.
Folk-leaders fared     from near and far
over wide lands     to look on the wonder,
the track of the terror,     glad he had taken
leave of his life     when they looked on footprints
wending away     to the mere of monsters.
Weary and weak,     defeated in war,
he dripped his blood-trail     down to dark water,
tinting the terrible     tide where he sank,
spilling his lifeblood     to swirl in the surge.
There the doomed one     dropped into death
where he long had lurked     in his joyless lair,
and Hell received     his heathen soul.

Also, thanks to Jeff Sypeck for introducing me to this translation. His blog is filled with all things Medieval, and worth losing a few hours in